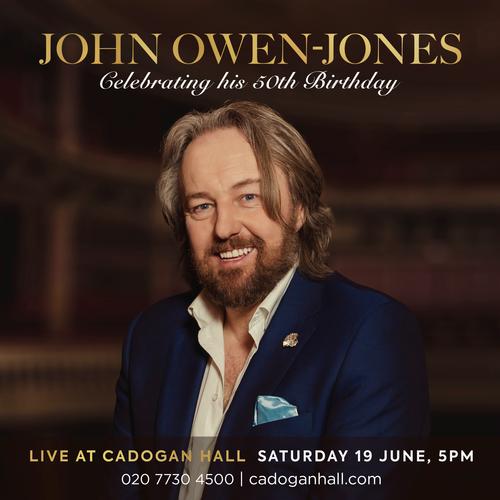 Lambert Jackson today announce John Owen-Jones: Celebrating his 50th Birthday, a special one-off concert to mark this milestone. Featuringsome of John’s favourite songs with a 5-piece band, the concert is performed live at Cadogan Hall with a socially distanced audience, and is also available to live-stream via Vimeo on Saturday 19 June 2021, 5pm.

John Owen-Jones said today, “It's been well over a year since I last performed a solo show to a live audience and I'm really excited about getting back on stage and performing at one of my favourite venues in London, the gorgeous Cadogan Hall. It's going to be a great night. What a way to celebrate the big five oh!”

Jamie Lambert and Eliza Jackson, CEO and Creative Director of Lambert Jackson, also commented, “John is one of the greatest performers of our time and to be able to celebrate his 50th birthday with a performance to both live and streamed audiences all around the world is such a fabulous way to mark this milestone for John.”

John Owen-Jones’ theatre credits include Les Miserables (West End/Broadway - he remains the youngest actor in history to have played Jean Valjean) and The Phantom of the Opera (West End - he has played The Phantom more than any actor in the show’s West End history); and was a special guest in both the Les Miserables and The Phantom of the Opera 25th anniversary concerts. He has performed in concert all over the world in venues such as the Royal Albert Hall, London, Carnegie Hall, New York and the Bolshoi Theatre, Moscow. He has released six solo albums: Hallelujah (2006), John Owen-Jones (2009), Unmasked (2011), Rise (2015), Bring Him Home (2017) and his most recent album Spotlight was released in 2019 and featured The City of Prague Philharmonic Orchestra.