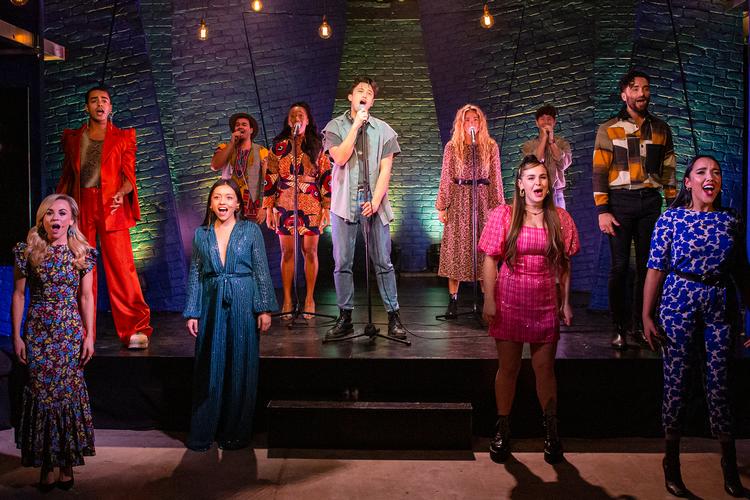 The 2021 WhatsOnStage Awards will be streamed live from Turbine Theatre on Sunday 14 March, in a unique ceremony celebrating theatre and its audiences. The ceremony will be presented by Jodie Prenger and Tom Read Wilson, featuring Amy Hart and Oscar Conlon-Morrey, with performances from musical theatre stars representing shows that were cut short in 2020, or are due to open in the coming years.

Sita McIntosh, Chief Operating Officer of WhatsOnStage, said today, "With no live performances at the moment, we like every Award show, have had to rethink how best to celebrate our industry and the amazing people who work in it. We are delighted to be able to bring together this stellar line-up of musical theatre talent, showcasing some of the amazing shows that were cut short by COVID-19 and highlighting those that audiences can look forward to. We are hugely grateful to everyone contributing their time and their talent. We can't wait to "raise the curtain" on Sunday 14 March at 7pm."

The line-up is as follows:

- Cedric Neal will perform "Gotta Start Somewhere" from Back to the Future the Musical, which is gearing up for an eagerly anticipated West End opening at the Adelphi Theatre after its Manchester run was disrupted by the pandemic.
- Lizzie Bea, set to lead the West End revival of Hairspray later this year at The London Coliseum, will perform "You'll Never Walk Alone" from Carousel.
- Ivano Turco will perform "Only You, Lonely You" from Andrew Lloyd Webber's brand new West End musical Cinderella, opening at the Gillian Lynne Theatre.
- Blake Patrick Anderson, Cleve September, Danielle Fiamanya, Frances Mayli, Grace Mouat, Jodie Steele, Jordan Luke Gage, Layton Williams, Matt Croke, Millie O'Connell and Sophie Isaacs will perform "Let The Sunshine In" from Hair. The outdoor revival of the show played on a jetty outside the Turbine Theatre last year and will be returning for performances at The London Palladium and on tour later in 2021.
- Stage star Siubhan Harrison will perform "Head Over Feet" from Jagged Little Pill, which was nominated for the most Tony Awards of the season (15) last autumn.
- Emma Kingston will perform "I Can Do Better Than That" from The Last Five Years after appearing in socially distanced outdoor revival of Jason Robert Brown's musical at the Minack Theatre in Cornwall.
- Danielle Fiamanya and Matt Croke will perform "Crazy Rolling" from Moulin Rouge!. Fiamanya recently appeared in Curve's The Color Purple virtual production, while Croke performed another number from Moulin Rouge! on The Voice UK earlier this year, earning public acclaim.
- Alexia Khadime and Christine Allado will perform "When You Believe" from The Prince of Egypt, which had its gargantuan West End production at the Dominion Theatre temporarily halted by the pandemic last year, but is now set to return.
- Dom Hartley-Harris and Alex Thomas-Smith will perform "I'll Cover You" from Rent, returning to the roles of Collins and Angel after a smash-hit run at the Hope Mill Theatre in Manchester was cut short by the pandemic.
- Jamie Muscato will perform "Something's Coming" from West Side Story, having led the show when it was mounted at Curve Leicester in winter 2019.
- Oscar Conlon-Morrey and Amy Hart will make appearances to highlight some of the work being done by the theatre community on and off the stage.

In lieu of nominating performers and creatives this year, the public have nominated Angels – someone in their life that has been a source of love, support, and kindness during the pandemic. From those nominations, 21 Angels will be announced during the ceremony and will receive a complimentary night at the theatre once live performances return.

Tickets are £21 and are available from www.stream.theatre/WOSA2021