“Christmas Again (The Show Must Go On)” - News

A new song for Christmas 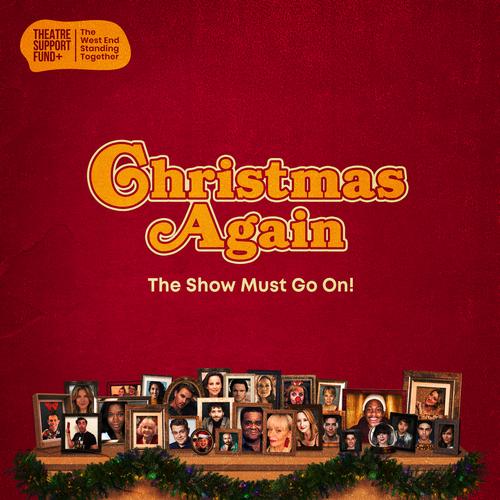 “CHRISTMAS AGAIN (THE SHOW MUST GO ON!)” is a brand-new original song written by Anna Hale, Joe McNeice and Matthew Spalding which features 30 performers from the West End and is available to buy now (Friday 27thNovember) from iTunes, Apple Music and Spotify.

“Christmas Again (The Show Must Go On)” celebrates Christmas in what has been a challenging year for all involved the theatre industry. All profits from the single will go to Theatre Support Fund+ who will distribute the profits to Acting For Others, The Fleabag Support Fund and the NHS COVID-19 Urgent Appeal.

Writer and producer of the track Joe McNeice said today,

“We couldn’t have done this without the tireless efforts of everyone involved, and the dedication of our creative team. Not to mention the singers, who either trekked through London to come to the studio or pulled out all the stops to get professional standard recordings to us remotely, people were just overwhelmingly generous with their support for the project, and I think that’s testament to the fact that everyone in our industry is absolutely desperate to do anything they can to get us all back to doing what we love.

It’s an incredibly volatile time and there are days where the future feels paper thin, so we just wanted to spread some festive cheer and hopefully raise a bit of cash for the Theatre Support Fund+ to raise monies for those struggling in the industry in these times. They have been an amazing support system to many so far and I hope our single can help many more.”

Joe McNeice is an up-and-coming theatre producer and director.  Joe was a director on the European premiere of DIVA: Live From Hell at the Brockley Jack, but the run was cut short due to the pandemic and never made it to opening night. Joe previously worked on The Great Gatsby and The Wolf of Wall Street productions and recently wrote a song for On Hope: A Digital Song Cycle (MP Theatricals, 2020) with Matthew Spalding.

Matthew Spalding is a Musical Director, pianist and composer/arranger. His previous credits as Assistant Musical Director include Curtains (UK and Ireland tour/Wyndham’s Theatre) and Camelot (London Palladium). Matthew was also the Andrew Lloyd Webber Associate Musical Director for the Royal Central School of Speech and Drama’s BA Acting Musical Theatre course 2018/19. His previous writing credits with Joe McNeice include a song for On Hope: A Digital Song Cycle (MP Theatricals) and workshop productions of Twilight Robbery in Surrey and York.

Theatre Support Fund+ was set up in April by theatre industry workers Chris Marcus and Damien Stanton who wanted to form an initiative to help individual workers who are no longer working due to the Coronavirus Pandemic. They created and designed ‘The Show Must Go On!’ t-shirt, the design of which is an amalgamation of the world-famous artwork of 16 of the biggest musicals in the West End. Since Theatre Support Fund’s inception, the team have raised over £500,000 with all profits from merchandise sold goes to Acting for Others, Fleabag Support Fund and the NHS Covid-19 Urgent Appeal.

The track is orchestrated by Tom Curran, Musical Director is Chris Ma and Musical Supervisor is Matthew Spalding. The track is produced by Joe McNeice for Theatre Support Fund+ and is available from Apple music, iTunes and Spotify.