Maximum 1.000 people will be allowed for indoor events in Tiers 1 and 2 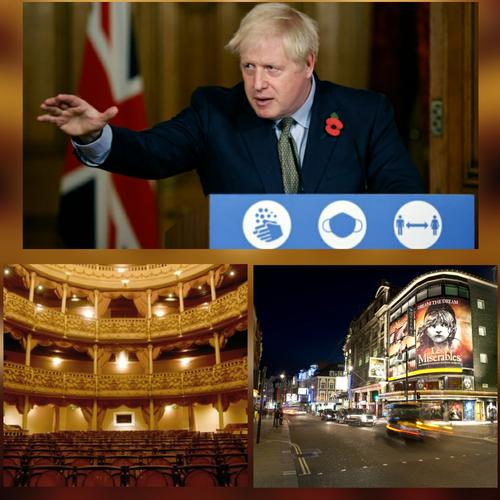 Britain’s lockdown will end next week on December 2 but a new tougher tiers system will last until at least spring, Boris Johnson said today.

Under the “Tier system” (tier 1-2-3), any venue placed in "tier three"  will not be able to stage shows in front of live audiences. Venues in tier one and tier two areas will still have to abide by social distancing and risk mitigation rules.

In tiers one and two, there will be capacity restrictions in place that mean a maximum of either 50 per cent of conventional capacity or 1000 audience members will be able to watch shows (whichever is the lowest).

The PM will lay out which place will go into which tier on Thursday.

Mayor of London Sadiq Khan said it was "too early to say" which places will go into which tiers.

The new rules, which will come in next week include:

- Households will be only able to meet up in Tier 3 in outdoor spaces like parks
- Pubs and restaurants in the top Tier will have to stay shut - but drive-throughs and deliveries can continue
- Tier 2 pub rules will be toughened, with only places serving food with drinks allowed even outside
- Casinos, bowling alleys, soft play areas, museums, galleries and cinemas in Tier 3 will have to stay shut
- Gyms and beauty salons can open across the nation - and all shops will open their doors again
- Brits will be able to go to see football matches in the lower tiers from December 2 onwards
- Elderly Brits will be able to come out of care homes to spend Christmas with the family if everyone tests negative
- New parents with a kid under one will be allowed to form support bubbles
- The Rule of Six will return across all Tiers but the 10pm curfew will be moved to 11pm
- Weddings will be allowed to take place with 15 guests - but receptions are banned in Tier 3

Julian Bird, chief executive of the Society of London Theatre and UK Theatre, said: "Today's announcement of new restrictions for performing arts venues in all tiers has shaken an already fragile sector. Closure of venues in tier 3 areas will mean cancellation of pantos and other shows, risking organisations' long-term survival and leaving theatre freelancers adrift with no compensation. The capacity constraints in tiers 1 and 2 will lead to financial problems for venues and disappointment for audiences. It is unclear why these have been instituted in a sector with no known spread of the virus. As ever, we remain committed to working with Government to secure the survival of our world-leading theatre sector."