A new schedule for the performances 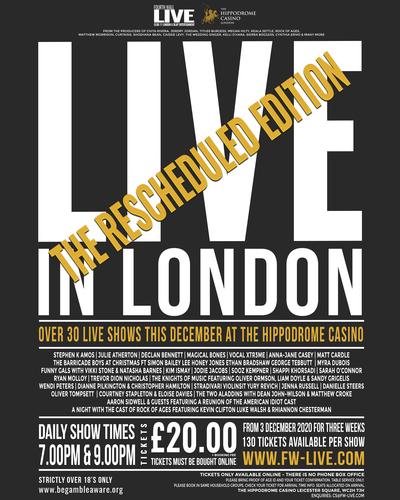 A new performance schedule for the LIVE IN LONDONseries at the Hippodrome Casino this winter has been announced. The season runs from Thursday 3 December until Sunday 20 December and includes two shows nightly at 7.00pm and 9.00pm. The series will feature stars from the world of musical theatre, comedy and magic with all tickets priced £20. Audiences will be safely socially distanced following the most up-to-date safety guidelines. There are 130 tickets on sale per show and tickets are on sale now.

This new schedule is different from the previously published roster due to the lockdown removing November from the season. Sadly, not all artists originally billed were able to reschedule, but Fourth Wall Live will endeavour to bring those artists to you another time.

THURSDAY 3 DECEMBER AT 9.00PM – A Night with the UK tour cast of Rock of Ages ft. Kevin Clifton, Luke Walsh and Rhiannon Chesterman

The Hippodrome Casino is an over 18’s venue only. If you are lucky enough to look under 25 you must bring photo ID