The Show Must Go On! raise half a million - News 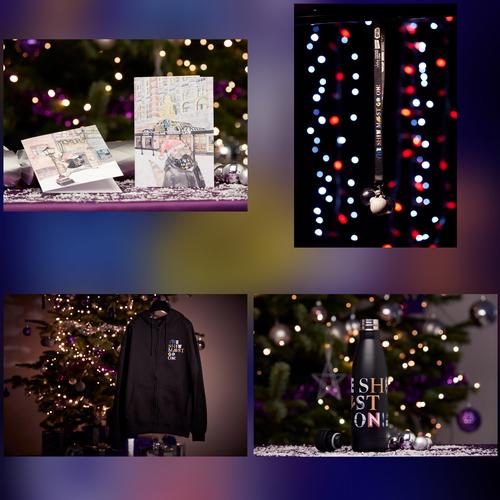 The creators of ‘The Show Must Go On!’ merchandise, the Theatre Support Fund+ are delighted to announce they have raised half a million pounds for charities Acting For Others, The Fleabag Support Fund and NHS COVID-19 Urgent Appeal.

Theatre Support Fund+ was set up by theatre industry workers Chris Marcus and Damien Stanton to help those who have been affected by the pandemic. In just six months the team have taken over 40,000 orders and the £500,000 raised has helped thousands of workers who have had no or limited work since theatres shut eight months ago. ‘The Show Must Go On!’ design is an amalgamation of the 16 biggest West End Musicals and has been recognised internationally with orders been sent to 70 different countries across the globe.

Phoebe Waller-Bridge, Vice President of Acting for Others and the figurehead for The Fleabag Support Fund said today,

“I would like to thank the founders of Theatre Support Fund+, Chris and Damien for their astonishing work raising £500,000 for the theatre industry. Their efforts have helped hundreds of freelancers who have received support from the Fleabag Support Fund and we wouldn't have been able to achieve this without the dedication, imagination and downright style that they brought to their campaign. I have been thrilled to be able to support this project and thank them deeply for choosing to donate to the Fleabag Support Fund. I’m consistently blown away by the care for and within the theatre community. Chris and Damien are two of its heroes!”.

‘Every day we become more overwhelmed with the generosity and support of everyone who has supported us on the journey so far. When we set up the campaign, six months ago we didn’t imagine for a moment we would reach a milestone like this. We’d always hoped we would be back working in theatres by this point, so our journey hasn’t ended yet. We will continue to unite and work together to raise monies for these charities to help all of those that have been affected from the pandemic until our theatre doors are open once again’.

The team also launched today their brand-new Christmas range with the help of theatre legends Bonnie Langford and Christopher Biggins. Christopher and Bonnie were reunited to bring some Christmas sparkle back into the theatre world  and spent the day with Theatre Support Fund+ trying out their new Christmas products. ‘The Show Must Go On!’ Christmas range includes Christmas cards, water bottles, lanyards and hoodies  which all feature The Show Must Go On! design. The design is an amalgamation of the world-famous artwork of 16 of the biggest musicals in the West End. Shows included on the design are & Juliet, Come From Away, Dear Evan Hansen, Everyone’s Talking about Jamie, Hamilton, Les Misérables, Mamma Mia!, Mary Poppins, Matilda The Musical, Six The Musical,Tina, The Tina Turner Musical, The Book of Mormon, The Prince of Egypt, Disney’s The Lion King, The Phantom of the Opera and Wicked. All profits will go to aforementioned charities and the Christmas range is available to buy now from the website

As well as a new range of merchandise Theatre Support Fund
+ have collaborated  with cult  Ice cream brand Northern Bloc who have created a unique flavour called The Show Must Go On!, which is a vegan, white chocolate ice cream laced with honeycomb. The 500ml tubs are now available to buy in Waitrose stores, all profits from tubs sold will go to Theatre Support Fund+.

Theatre Support Fund+ are also the creators of The Show Must Go On! Live at The Palace Theatre which has now been rescheduled from 20 to 24 January 2021.