The staged concert is coming to the Dominion Theatre 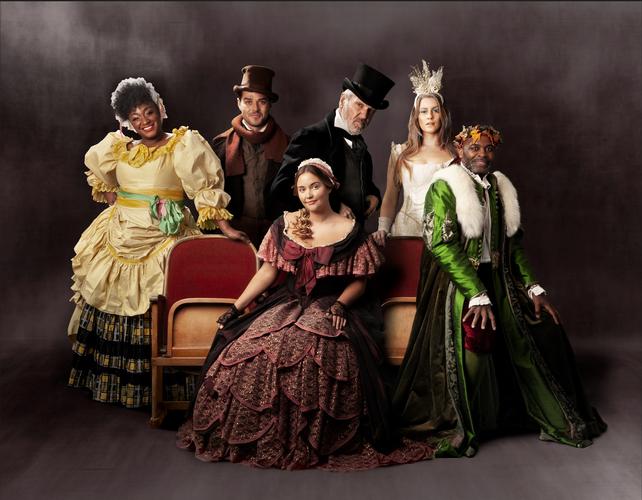 A star cast will join Brian Conley in the new, musical staged concert of Alan Menken, Lynn Ahrens and Mike Ockrent's A Christmas Carol, which is set to play a strictly limited season at the Dominion Theatre in London. Performances run from Monday 7 December 2020 to Saturday 2 January 2021 (Press Night: Monday 14 December at 7:00pm).

I’m A Celebrity...2019 winner Jacqueline Jossa will join the cast as Emily/Ghost of Christmas Future. Jacqueline is an award-winning actress who played Lauren Branning in BBC1's Eastenders from 2010-2018.

Matt Jay-Willis will play Bob Cratchit. Matt’s band Busted were one of the biggest pop success stories of the early noughties, and he has since starred in Wicked and Little Shop of Horrors in the West End.

Joining them are acclaimed performers Lucie Jones (Waitress, Rent, The X-Factor finalist), who will play The Ghost of Christmas Past, Sandra Marvin (Emmerdale,Waitress) who will be Mrs Fezziwig and Martyn Ellis (My Fair Lady, One Man, Two Guvnors) who will play her husband Mr Fezziwig.

Cedric Neal (The Voice, Motown The Musical, Back To The Future The Musical) will be The Ghost of Christmas Present, Jeremy Secomb (The Phantom of the Opera, Jerry Springer: The Opera) takes the role of Jacob Marley, Rebecca Lock (Heathers, Curtains) will play Mrs Cratchit andSam Oladeinde (Hamilton, The Book of Mormon) will be Fred Anderson/Young Scrooge.

The staged concert will star TV comedy legend and West End star Brian Conley (9 to 5, Chitty Chitty Bang Bang, Jolson [Olivier nomination], Hairspray) as the iconic Ebenezer Scrooge, who will be joined on stage by an orchestra and cast of over 50.

The musical brings Dickens’ timeless fable to glorious life: telling the tale of Ebenezer Scrooge, a mean-spirited miser who does not believe in the power of Christmas. But on a Christmas Eve filled with memorable characters, spectacular songs, ghostly apparitions and journeys to the past, present and future, Scrooge acknowledges his mistakes and discovers the joy of redemption. With a sparkling Broadway score played by the London Musical Theatre Orchestra, an all-star cast and a touch of festive magic, A Christmas Carol at the Dominion is the must-see West End production this December.

Written by the critically acclaimed team of Alan Menken (Aladdin, Beauty and the Beast), Lynn Ahrens (Anastasia, Ragtime) and Mike Ockrent(Me and My Girl, Crazy for You), the stage musical of A Christmas Carol first premiered in 1994 at New York’s Paramount Theatre. It ran for a decade at Madison Square Garden, and was seen by over 5 million people, becoming a firm Christmas tradition. The London Musical Theatre Orchestra (LMTO) have previously performed A Christmas Carol to sell-out audiences and five-star reviews in 2016, 2017 and 2018 at the Lyceum Theatre in London’s West End.

The creative team is led by director Shaun Kerrison, who has helmed several previous concert productions for LMTO (A Christmas Carol, Mack and Mabel, Candide) as well as BBC Proms My Fair Lady and Kiss Me, Kate, with Freddie Tapner (founder of LMTO) as Musical Director. Sound Design is by Nick Lidster for Autograph (Jesus Christ Superstar, The Band), Design is by Dora Schweitzer (The Wipers Times), Musical Staging is by Tim Jackson (Merrily We Roll Along, The Season), Lighting Design is by Mike Robertson (Sunday in the Park with George), Projection Design is by George Reeve (Six Broadway, Rogers and Hammersteins’s Cinderella) and Casting is by Jim Arnold CDG (Wicked, The Prince of Egypt).

With soaring melodies, moving lyrics and a moral for our times, this will be a Christmas event to reunite families after the hardest year in living memory.

A Christmas Carol is produced by Freddie Tapner for the London Musical Theatre Orchestra and Gary England. LMTO is the world’s only professional orchestra dedicated solely to performing works of musical theatre.

COVID-19 safety measures and social distancing will be in place front of house, on stage, backstage and throughout the Dominion Theatre.

If you become unable to attend, unwell or are having to isolate, you will be able to exchange your tickets free of charge up to 24 hours before your performance.

A Christmas Carol is a strictly limited run from 7th December 2020 to 2nd January 2021. The hit musical The Prince of Egypt will resume its run at the Dominion Theatre in the Spring of 2021, pending UK Government advice.