The Cast of The Show Must Go On Live! - News

Two new dates have been added 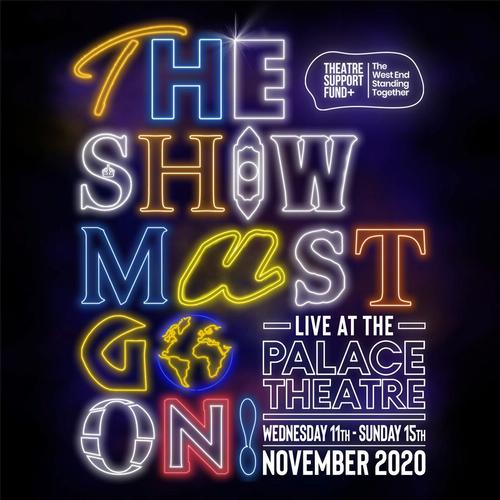 After a record breaking on-sale and due to phenomenal public demand, THE SHOW MUST GO ON! LIVE AT THE PALACE THEATRE will play a further two dates and will now run from 11th to the 15th November.

The producers are also thrilled to announce the initial line up and casting for the concert which includes:

The concert will also include a brand-new opening number, written by Stiles & Drewe called ‘The Show must Go On!’ which celebrates the theatre industry in these current times.

The concert will be directed by Luke Sheppard and Anna Fox, Set Design by Soutra Gilmour Lighting Design by Neil Austin and Howard Hudson, Video Design by Fray Studio, Sound Design by Adam Fisher and Musical Supervisor and Conductor is Stephen Brooker.

Chris and Damien from Theatre Support Fund+ said today, ‘We are overjoyed with the response to the concert and delighted to announce two more performances.

"We are thrilled to be bringing together all 16 West End Shows which appear on our Show Must Go On! t-shirt. We never imagined our original design would end up becoming a real-life performance at The Palace Theatre! We are so thankful to have such a wonderful team and cast who have helped make this show possible.

These concerts have united the industry by providing work to many and helping those who have lost work by giving profits to two very special industry charities. We are overwhelmed with the support and generosity we have received so far and we would like to thank everybody who has supported our cause of helping those in the industry who have been affected in these uncertain times’" said the organizers.

THE SHOW MUST GO ON! LIVE AT THE PALACE THEATRE is produced by Chris Marcus & Damien Stanton for the Theatre Support Fund+ with Executive Producers, Jack Maple & Brian Zeilinger-Goode for Take Two Theatricals.

Theatre Support Fund + was set up in April by theatre industry workers Chris Marcus and Damien Stanton who wanted to form an initiative to help individual workers who are no longer working due to the Coronavirus Pandemic. They created and designed ‘The Show Must Go On!’ t-shirt, the design of which is an amalgamation of the world-famous artwork of 16 of the biggest musicals in the West End. Since Theatre Support Fund’s inception the team have raised over £350,000 with all profits from merchandise sold goes to Acting for Others, Fleabag Support Fund and the NHS Covid-19 Urgent Appeal.

Capacity at the Palace Theatre has been reduced to comply with COVID-19 Secure guidelines for social distancing plus robust risk mitigation. In addition to hand sanitation, face coverings and track and trace, other measures will include contactless tickets, temperature testing and the deep clean and sanitation of the theatre.