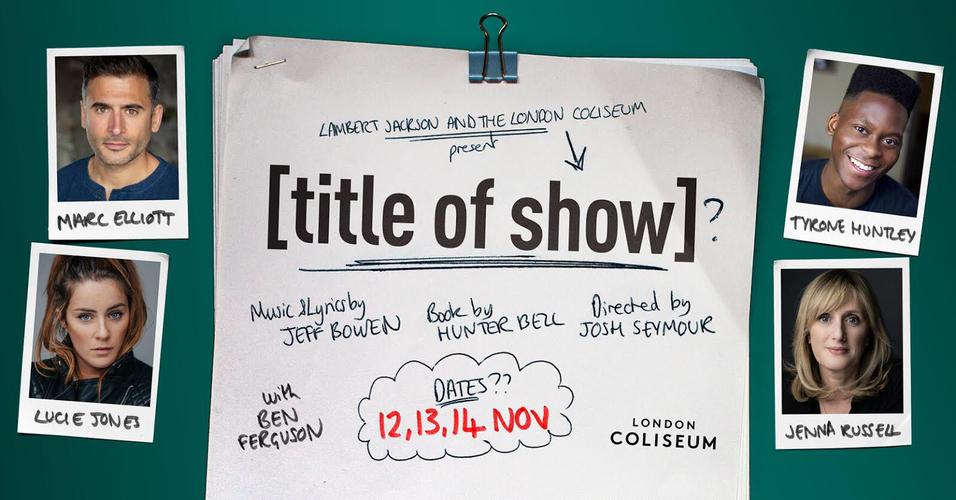 Jeff and Hunter, two self-confessed nobodies in New York, make a pact: they will write an original musical and submit it to the New York Musical Theatre Festival. The only catch? The deadline is in three weeks! They’re joined by their two actress friends, Susan and Heidi and their music director, Larry but they hit another roadblock… What should they write about? They decide it’s best to “write what you know,” and set off on a unique musical adventure: writing a musical about writing a musical. As the deadline looms, insecurities creep in and jealousies flare. Will the team succeed with their musical? Could it even win a Tony?!

Jamie Lambert and Eliza Jackson, CEO and Creative Director of Lambert Jackson Productions, today said: “We are so excited to bring this Tony Award-nominated show to the UK and stream it in partnership with the London Coliseum - what a phenomenal cast and creative team! We are determined to keep bringing theatre to audiences during this very scary and difficult time, and our streamed projects have had such a wonderful impact throughout 2020 that we want to carry on producing them for audiences across the world.”

Tickets for the streamed performances are available here

Josh Seymour directs. He was the Runner-Up for the RTST Sir Peter Hall Director Award in 2018, and was Resident Assistant Director at the Donmar Warehouse from 2014-15. His previous directing credits for the stage include Musik (Assembly Rooms Edinburgh, Leicester Square Theatre), Adding Machine: A Musical (Finborough Theatre), Loserville (Stafford Gatehouse), and One Arm (Southwark Playhouse). As an Associate Director, his credits include A Christmas Carol (The Old Vic), Follies (National Theatre), Red (Wyndham’s Theatre), Beautiful – The Carol King Musical (Aldywch Theatre), and My Night with Reg (Apollo Theatre).