The Show Must go On! Live - News 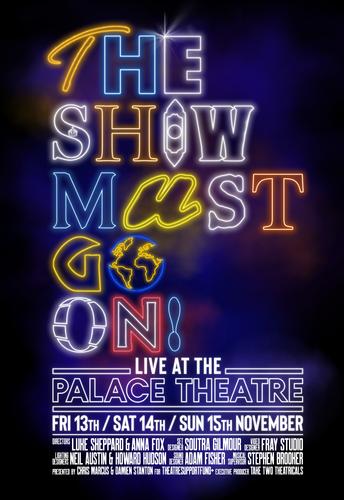 The Show Must Go On! Live At The Palace Theatre will be a concert celebrating the wealth of West End talent with all profits going to Acting For Others and The Fleabag Support Fund.

The concert will be a collection of cast performances from West End shows. Shows confirmed to perform include & Juliet, Come From Away, Dear Evan Hansen, Everybody’s Talking About Jamie, MAMMA MIA!, The Prince of Egypt, SIX, TINA – The Tina Turner Musical and Wicked.

Further shows and an all star cast will be announced soon!

The concert will be directed by Luke Sheppard and Anna Fox, Set Design by Soutra Gilmour Lighting Design by Neil Austin and Howard Hudson, Video Design by Fray Studio, Sound Design by Adam Fisher and Musical Supervisor and Conductor is Stephen Brooker.

Theatre Support Fund + was set up in April by theatre industry workers Chris Marcus and Damien Stanton who wanted to form an initiative to help individual workers who are no longer working due to the Coronavirus Pandemic. They created and designed ‘The Show Must Go On!’ t-shirt, the design of which is an amalgamation of the world-famous artwork of 16 of the biggest musicals in the West End. Since Theatre Support Fund’s inception the team have raised over £350,000 with all profits from merchandise sold goes to Acting for Others, Fleabag Support Fund and the NHS Covid-19 Urgent Appeal.