"Give Us A Date" Says Andrew Lloyd Webber - News 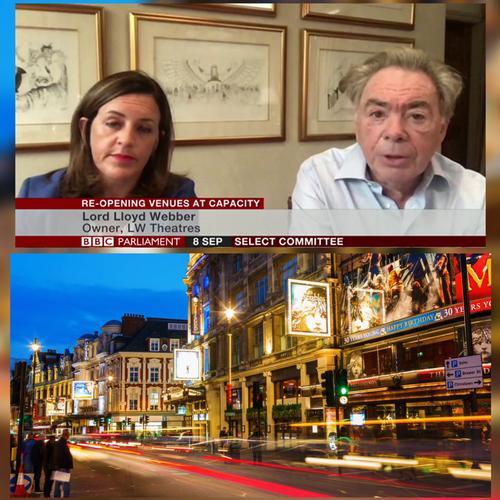 Andrew Lloyd Webber and Rebecca Kane Burton (LW’s Theatres CEO) told today the Digital, Culture, Media and Sport Committee that “theatre is at the point of no return” and asked why airlines can pack people on to planes but theatres can’t open.

“Give us a date” were Andrew Lloyd Webber’s final words.

The theatre impresario has repeatedly called on the government to provide "clarity and consistency" on the vexed issue of reopening the UK's theatres.

He said many times things were "hopeless" without a date on which theatres are allowed to reopen without social distancing.

“To put the live theatre and entertainment sector in context, more than 15.3 million people attended London theatres in 2019 – nearly 1 million higher than Broadway – equating to £799 million in box office revenue and generating £133 million of VAT. Of the £799 million generated, £523 million came from the box offices of musicals with the rest generated by plays, operas, dance etc. While the government mandated lockdowns of theatres and live venues are in place, this revenue has dropped to zero with no income available to cover running costs during the closure period or pay the vast numbers of people employed in the industry. London theatres attract audiences not just from across the UK but from around the world. The West End and other London theatres are vital to the tourism industry in the capital and attract visitors who then go on to spend money in London restaurants, hotels, transport system etc. According to a 2004 academic research paper commissioned by Art Council England from the University of Sheffield , the economic impact of West End theatres, including ticket sales, transport, food & drink and childcare, was £1.5bn and the economic impact of all theatres across the UK was £2.6bn. According to the 2004 paper, the revenue generated by West End theatres at the time was only £330m compared with £799m in 2019. If we assume the economic impact of the theatre industry has increased proportionately with ticket sales then the current economic impact of London theatres is closer to £4bn.

Another industry concern is that in most cases significant audience attendances are required before theatrical productions are able to cover their weekly expenses meaning that some potential social distancing rules (such as running venues at half capacity) are unlikely to be viable solutions for the theatrical sector. For example, on average a West End musical requires 55% of the venue’s tickets to be sold in order to meet the production’s running costs. For more expensive shows such as The Phantom of the Opera this can be as high as 65% or more

It is believed lessons can be learned from the management strategies that have been employed in other territories, such as the strategy of increased testing coupled with track and trace which has been employed successfully in South Korea and enabled its theatres and venues to largely remain open throughout the duration of the epidemic. As the producer of Phantom of the Opera in Seoul (one of the few first class theatrical productions in the world to still be operating) RUG has a unique insight into the effectiveness of the measures taken in South Korea.” (The Really Useful Group Limited’s response to the call for evidence by the Department for Digital, Culture, Media and Sport (“DCMS”) as regards the impact of the current Covid-19 epidemic)