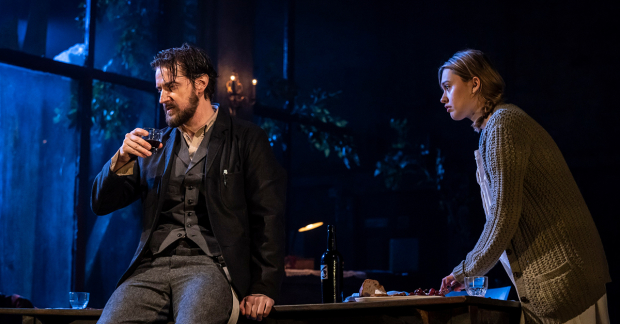 When the country went into lockdown in March and theatres were forced to close, Ian Rickson’s acclaimed production of Uncle Vanya was in the final weeks of its scheduled, sold-out run. The production had received Olivier nominations for Toby Jones (Best Actor Award), Ian Rickson (Best Director Award), Bruno Poet (Best Lighting Design Award) and Rae Smith (Best Set Design Award). Despite the entire team’s best efforts and wishes, the live production will not be able to return.

Sonia Friedman Productions today is delighted to announce that Ian Rickson’s highly acclaimed production of Conor McPherson’s new adaptation of Uncle Vanya has been filmed on stage at the Harold Pinter Theatre in partnership with Angelica Films. The new film version of the production will be shown in cinemas ahead of broadcast on the BBC (date tbc) with further distribution details to be announced soon. This makes it the first UK stage production closed by the Coronavirus pandemic to have been filmed and produced for the screen.

Sonia Friedman Productions and the BBC have partnered with Angelica Films to create a sumptuous re-interpretation of Ian Rickson’s stage production. Marrying the intimacy of film with the electricity of live performance, the team has made this far more than simply a film of the play.

Directed for screen by Ross MacGibbon, the film reunites nearly all of the original cast of the production that was in its final weeks when the country went into lockdown in March and theatres were forced to close. Only Ciarán Hinds was unavailable and his role has now been taken by Roger Allam (A Number, Endeavour, The Moderate Soprano, The Thick of It).

“Sonia Friedman (SFP) and Sally Angel (Angelica Films) said: “Collaborating on filming Ian Rickson’s extraordinary production of Uncle Vanya has been a wonderful and inspiring experience. Despite all the challenges involved in filming this production (with no social distancing on screen), the results are testament to a brilliant and dedicated cast and crew led by Ian himself alongside Ross MacGibbon. It is such a privilege that we are able to bring this beautiful production to a wider audience after its run was cut so brutally short by the Covid-19 pandemic in March. We would also like to thank SFP’s loyal coproducers who have so generously allowed us to pursue this vision for the filmed production and enabled it to become a reality”.

The filming took place under strict Covid-19 secure, independently drawn up protocols, with the cast self-isolating and undergoing regular tests and the crew in masks, PPE and socially distancing throughout the process.

As live performances are unable to resume, if you are a current ticket holder, you do not need to do anything as your point of purchase will be in contact to arrange a credit note or refund, but we encourage you to sign up to hear when Uncle Vanya will be shown in cinemas and broadcast on the BBC.

The production ran at the Harold Pinter Theatre from 14th January 2020 with an Opening Night on Thursday 23rd January 2020.

In the heat of summer, Sonya (Aimee Lou Wood) and her Uncle Vanya (Toby Jones) while away their days on a crumbling estate deep in the countryside, visited occasionally only by the local doctor Astrov (Richard Armitage).

Uncle Vanya is the eleventh collaboration between Ian Rickson and Sonia Friedman Productions, with previous productions including Rosmersholm, Jerusalem, The River, Betrayal and The Children’s Hour.

The stage production of Uncle Vanya was designed by Rae Smith, with lighting by Bruno Poet, music by Stephen Warbeck, sound by Ian Dickinson and casting by Amy Ball CDG.