The Turbine of the Jetty- News 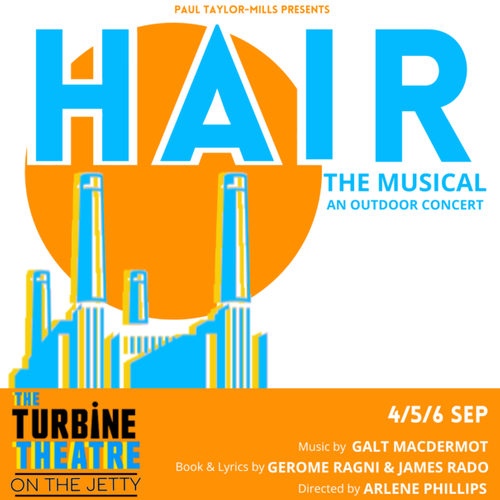 The Turbine Theatre has announced a season of musical revivals, concerts, family-friendly pieces and Shakespeare shows across the three-week run, which commences on 26 August.

Arlene Phillips will direct an outdoor concert staging of award-winning rock musical Hair from 4 to 6 September. The piece has book and lyrics by Gerome Ragni and James Rado with music by Galt MacDermot, and tells the story of a group of anti-war, politically active, long-haired hippies in the 1960s. It has numbers including"Good Morning, Star Shine", "Let the Sunshine In" and "Aquarius".

Other shows in the Turbine's season include a staging of Horrible Histories' Barmy Britain (26 to 29 August), award-winning family nature odyssey One Duck Down (30 August), The Best of Frankie Valli and the Four Seasons (31 August and featuring cast members from Jersey Boys) and a Bard in the Yardexperience (6 September).

Power ballads will be the order of the day in rock and pop piece The Final Countdown (8 September), while a special version of Aesop's Fables runs during the same day on 9 September. That evening, a truncated version of Macbeth will be staged, while on 12 September there will be two further shows – a pirate summer pantomime entitled Black Sails and a one-man version of Great Expectations from David Mynne.

On 13 September there will be the vocal trio The Femmes, while in the evening a group of musical stars will present a special "Roles We'll Never Play" concert.

Shakespeare's Two Gentlemen of Verona will run on 15 September,  on 16 September vocalists from London's West End shows will present rock hits from shows such as We Will Rock You, Rock Of Ages, Bat Out Of Hell and Beautiful! - The Carole King Story.

The Showstoppers will improvise their own musical on 17 September, while  musical group The Barricade Boys will perform on 18 September. On 19 September, the musical Catfish will be staged in concert for one-night-only.