Theatres can now open. But they won't - News 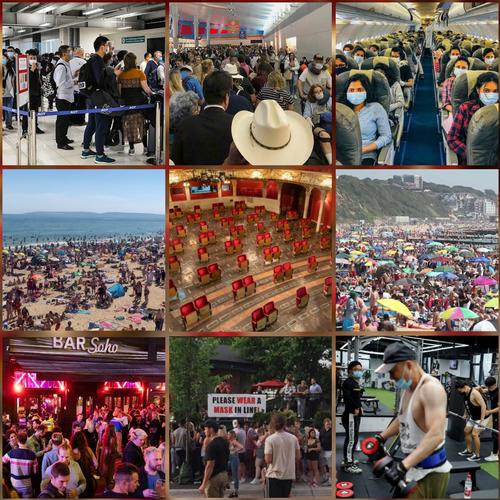 Producers and theatres have reacted cautiously to the Government’s plan to reopen theatres for indoor performances from the first of August, with social distancing measures.

While some press was triumphantly announcing the opening of the shows, Jon Morgan, director of the Theatres Trust, said: “For most theatres, it will not be economically viable to reopen with 30 to 40 percent audience required under social distancing. We now need to progress as quickly as possible to an announcement on the all-important Stage 5, allowing theatres to reopen fully with the appropriate safety measures.” 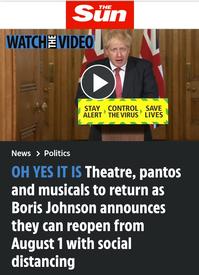 It seems as though the message is “Let’s listen to what some want, but not to everyone”, with some categories being victims of a disparity of treatment.

Let’s think about pubs: we all have seen the pictures. Thousands flock to the famous district of Soho in London, gathering in large groups, drinking and dancing with little social distancing and almost complete absence of face protection.

Talking about the Super Saturday (the day pubs, bars and restaurants reopened), a store manager in Soho said “Quickly everything got out of control and by 8-9 p.m. it was a proper street party with people dancing and drinking. Barely anyone was wearing masks and nobody respected social distancing. To be honest with that many people on one street, it was physically impossible.”

Everything is allowed on a street of Soho.

But nothing inside a theatre. 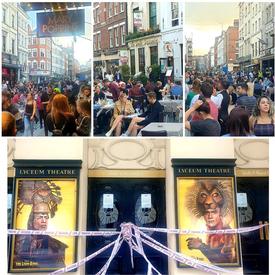 In the last weekends, crowds have flocked to beaches. In June, three beach towns on England's southern coast declared a "major incident" after thousands defied coronavirus social-distancing rules. People like sardines on the beaches. Does maybe the sand kill the virus? Not really.

But theatres were empty. 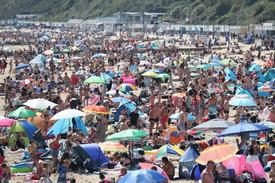 Why can we sit on a flight a few centimetres from the person next to us, or be on a crowded train, work out at the gym or swim in pools, but not sit with a mask in a theatre? 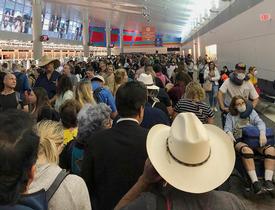 SOLT (Society of London Theatre) and UK Theatre said: “We are delighted that indoor performances can resume with socially distanced audiences from 1 August. With the restrictions of social distancing in place, it will not be practical or economically viable for many shows to open and it takes time for shows to rehearse and prepare and to build up an audience. However, this is another welcome step on the roadmap towards opening with full audiences very soon." 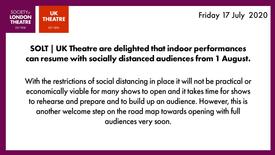 And let’s not forget about the artists. The Government’s guidance says “Providing space for performers and other attendees to be socially distanced from each other and from any audience, production team members or other individuals, wherever possible during training, rehearsal, pre-production, performance and any other form of performing arts activity.”

How can artists socially distance when performing dance numbers or romantic scenes? Also, in many theatres, wing spaces are very small and actors and backstage crew are all in close proximity.

The truth is we all know that for the vast majority of theatres and music venues it is not financially viable to function under social distancing conditions.

If only some of us are free from constrictions, it means that nobody is really free.