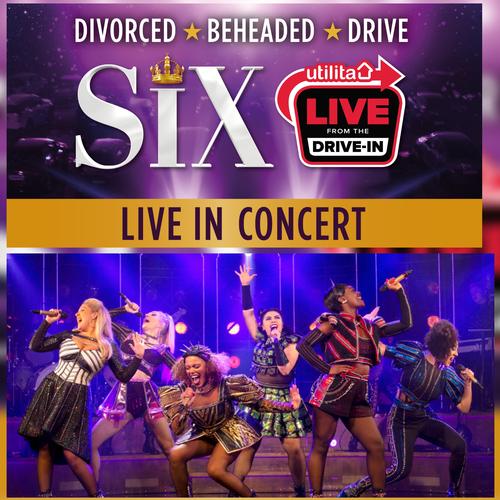 SIX will become the first West End musical to resume performances across the U.K. with Utilita Live From The Drive-In.

Producers announce today that SIX will play at 12 open-air drive-in concert venues in London and other UK cities from Bristol to Edinburgh as part of Live Nation Entertainment’s Utilita Live From The Drive-In summer season.

Designed to comply with all official guidelines, Utilita Live From The Drive-In will deliver the UK’s premier drive-in experience, boasting concert quality sound from a live stage with a full state of the art sound system, lighting rig and high definition LED screens, creating an arena or stadium concert feel in a safe Drive-In setting adhering to the Government’s current social distancing rules to protect fans, artists, crews and staff at all times.

SIX will perform an 8-show week in each venue with customers arriving by car but able to step outside, picnic and party while they watch the festival-style live stage show from their own dedicated area next to their vehicle.

Producer Kenny Wax said: “We are delighted that SIX will spearhead the reopening of one of London and the UK’s most popular shows. With the industry in crisis, theatres struggling and some even going out of business, this drive-in event offers hope for the future and equally importantly, jobs for about 50 of our company including cast, musicians, stage managers, technicians and freelancers. We are using both our West End and UK touring casts, rehearsing and touring them in a bubble and having them work in teams of 6 (fortunate for us) as per the government guidance.”

Thousands of SIX fans were left bitterly disappointed when sold out runs at the Arts Theatre in London as well as up and down the country on the UK Tour were cancelled. All cancelled UK touring  dates have been moved to 2021.

Will I be seeing the full show?
Yes, the whole show will be performed live from start to finish. The duration is 75 minutes and there is no interval.

Will the cast be wearing their show costumes?
Yes.

How will I see the stage and the cast if we are parked a long way away?
Like most concerts, there will be large screens on either side of the stage and live show footage played on the screens.

Can I sing and dance along?
We hope you can enjoy yourselves without spoiling the enjoyment of others around you.

Will we be able to ‘meet and greet’ after the show for autographs and photos?
Due to current social distancing guidelines related to Covid 19, sadly the cast will not be available after the performance to meet
audience members.

Is the show being filmed for broadcast?
No, this production is not being filmed and filming of the performance prior to the Mega Six is strictly prohibited.