The Sound of Music Streamed this Weekend for free - News 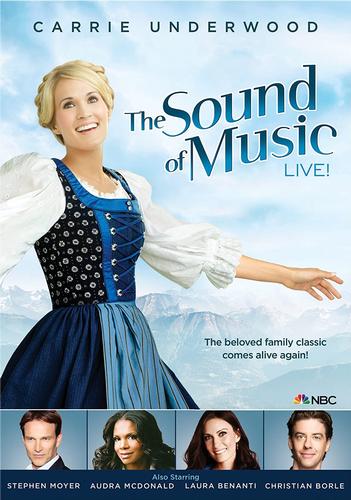 The YouTube Channel "The Show Must go On" continues its series with the  Rodgers & Hammerstein production of THE SOUND OF MUSIC LIVE!, a television special originally broadcast by NBC in 2013, featuring seven-time Grammy Award-winner Carrie Underwood and True Blood star Stephen Moyer. For UK viewers this is an encore: a second chance to watch the show, which streamed here earlier in the schedule.

From the producers of the Academy Award-winning Chicago and BAFTA and Golden Globe nominated Hairspray, Craig Zadan and Neil Meron of Storyline Entertainment, the special was an adaptation of Richard Rodgers and Oscar Hammerstein II's 1959 Broadway musical The Sound of Music. Directed by Tony Award-winning theatre director Rob Ashford and Prime Time Emmy-nominee Beth McCarthy-Miller, the production was originally a ratings success for NBC, delivering the network’s most-watched Thursday with non-sports programming since the Frasier finale in 2004 and ultimately reaching more than 42 million viewers. It remains the most-watched live musical television event since its broadcast revived the format in 2013.

Carrie Underwood and Stephen Moyer star as Maria and Captain von Trapp in this beloved story of the young novice who falls in love with Captain von Trapp and his seven children, set against the backdrop of Nazi-occupied Austria. The jewel in the Rodgers & Hammerstein crown, THE SOUND OF MUSIC LIVE! contains some of the most famous songs ever written for the stage, including “The Sound of Music,” “My Favorite Things,” “Do-Re-Mi,” “Sixteen Going on Seventeen,” “Climb Ev’ry Mountain” and “Edelweiss.” This version of The Sound of Music has been faithfully adapted from the original stage musical to retell the story for a whole new generation.

To support the livestream, Time Out and The Rodgers & Hammerstein Organization are hosting live viewing parties of THE SOUND OF MUSIC LIVE! on Friday 26th June at 8pm BST (UK) and 8pm ET (US). Gather the whole family and use #SoundOfMusic on social media to be a part of the fun!

While the stream is free for everyone to enjoy, those who view the stream are encouraged to support the American Civil Liberties Union (ACLU), by visiting THIS LINK. A donate button will also be added to the full-length video. The ACLU has been at the center of nearly every major civil liberties battle in the U.S. for more than 100 years and is committed to fighting for freedom and the protection of constitutional rights for generations to come.