Part of National Theatre at Home 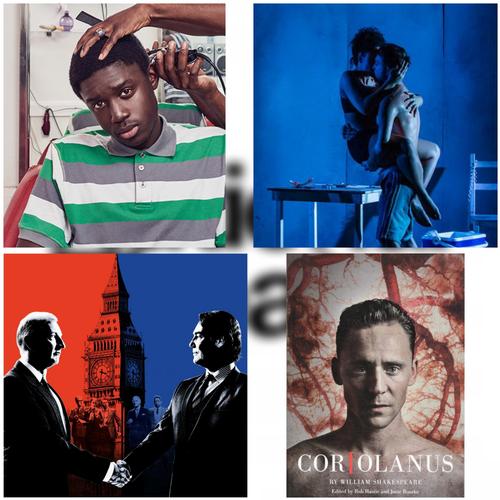 On 14 May the NT will stream the never-before-seen archive recording of Inua Ellams’ smash-hit play Barber Shop Chronicles, a co-production with Fuel and Leeds Playhouse. Captured at the National Theatre in January 2018 during its second sold-out run at the Dorfman theatre, the production went on to tour internationally including performances at BAM in New York with a return to London’s Roundhouse last Summer. The play tells the interwoven tales of black men from across the globe who, for generations, have gathered in barber shops where the banter can be barbed and the truth is always telling. Directed by Bijan Sheibani the cast includes Fisayo Akinade, Hammed Animashaun, Cyril Nri and Sule Rimi.  You can watch it here.

The 2014 NT Live broadcast of the Young Vic and Joshua Andrews co-production of the Tennessee Williamstimeless masterpiece A Streetcar Named Desire will be streamed on the 21 May. As Blanche’s fragile world crumbles, she turns to her sister Stella for solace – but her downward spiral brings her face to face with the brutal, unforgiving Stanley Kowalski. The cast includes Gillian Anderson as Blanche, Ben Foster as Stanley and Vanessa Kirby as Stella. The production, directed by Benedict Andrews, remains the fastest-selling production in Young Vic history.

The National Theatre production of This House by James Graham (Quiz, West End and ITV) will be streamed on 28 May. Filmed live in 2013, This House is a timely, moving and funny insight into the workings of British politics.  It’s 1974, and Britain has a hung Parliament.  The corridors of Westminster ring with the sound of infighting and backstabbing as the political parties battle to change the future of the nation. Jeremy Herrin directs a cast including Phil Daniels, Reece Dinsdale, Charles Edwards and Vincent Franklin.

The Donmar Warehouse production of Coriolanus staged by former Artistic Director Josie Rourke will be streamed on the 4 June.  When an old adversary threatens Rome, the city calls once more on her hero and defender: Coriolanus. But he has enemies at home too. In one of the Donmar’s most popular ever productions, Tom Hiddlestonplays the title role in Shakespeare’s searing tragedy of political manipulation and revenge. Cast also includes Alfred Enoch, Deborah Findlay and Mark Gatiss.

All productions will be free and screened live at 7.00PM BST and will then be available on demand for seven days.

The next National Theatre at Home Quiz will be available from 7pm on Monday 25 May, introduced by James Graham, and featuring Imelda Staunton, Jim Carter, Lucian Msamati, Meera Syal, Simon Callow, Tamsin Greig, and Jessie Buckley posing the questions on topics including Science and Nature, Literature and Theatre. The Quiz is available via the NT’s YouTube channel and Facebook page.

Lisa Burger, Executive Director and Joint Chief Executive said – “I’m delighted that in this next collection of titles to be streamed as part of National Theatre at Home we are including productions from our NT Live partner theatres. When we launched National Theatre at Home last month, we wanted to offer audiences the opportunity to engage with theatre during this time of isolation while we were unable to welcome them to the South Bank or into cinemas. This initiative wouldn’t have been possible without the support of a great number of artists for which we are incredibly grateful. We have been absolutely thrilled by the response from viewers enjoying the productions from right across the globe, and we have also been surprised and delighted at the generous donations we’ve received since closure. Whilst the National Theatre continues to face a precarious financial future, we now feel able to make a payment to all artists involved, as we recognise a great many are also experiencing a particularly challenging time at this moment. While theatres across the world remain closed, we're pleased that we can continue to bring the best of British theatre directly into people’s homes every Thursday evening.”

The National Theatre is currently closed to audiences and like theatres all around the world is facing a devastating impact from Coronavirus.  NATIONAL THEATRE AT HOME is free of charge but should viewers wish to make a donation to support the National Theatre, we have launched a public appeal on our home page: nationaltheatre.org.uk

Money donated via YouTube will be shared with the co-producing theatre organisations of each stream, including the Donmar Warehouse, Fuel, Leeds Playhouse and the Young Vic, helping to also support them through this period of closure and uncertainty.