All the Web’s a Stage - News

The full programme has been announced 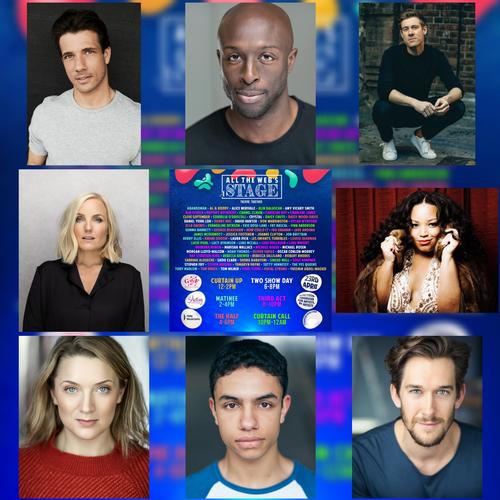 Theatre Together, a new collective of over 100 artists and professionals, today announce the full programme for All the Web’s a Stage an online fundraising event featuring a variety of live performances that will be streamed tomorrow, Thursday 23 April from midday to midnight. Audiences will be able to watch the event free on www.theatretogether.co.uk and are invited to donate in support of the performing arts and those who work in the industry.

Highlights include Stephen Fry reading Michael Rosen’s These are the Hands ahead of Clap for Carers at 8pm; songs from Musical Theatre stars including Joanne Clifton, Louise Dearman, Kerry Ellis, David Hunter, and Marisha Wallace; Don Warrington opens the event reading Shakespeare’s All the World’s a Stage monologue; a live Q&A with Danny Mac; poetry from Jade Anouka and Luke Wright; comedy from Ivo Graham and The Yes Queens, a multi-location dance choreographed by Chris Whittaker and closing the event is Evangeline Dickson reading a new monologue, All the Web’s a Stage.

In addition, throughout the week there will be a series of events across Theatre Together’s social media platforms including special performances on Instagram live – details to be announced via Twitter and an auction with the opportunity to bid for exclusive prizes including the company of NOTFLIX performing a personalised musical based on the winners chosen film and performed at a venue of their choice, a three-course dinner for two and overnight stay at a Classic Lodges hotel, a beautiful architectural drawing of the National Theatre and two season tickets for Park Theatre. For more information and to bid please visit www.theatretogether.co.uk/auction.

The funds raised will go towards Acting for Others and Help Musicians to support those in the arts facing hardship now as a result of the Coronavirus (COVID-19) pandemic, as well as to The Golsoncott Foundation, supporting individuals or organisations who have been impacted by the crisis to return with a piece of work once the industry begins to recover.  To donate please visit: www.justgiving.com/crowdfunding/theatre-together

Paul-Ryan Carberry, co-producer of All the Web’s a Stage, said today, “The overnight closure of the performing arts industry - while necessary and important for all of our safety - has meant that thousands of our colleagues are without an income for the foreseeable future. We refuse to stand by whilst so many of our peers are going through hardship and so we’re delighted to be supporting three excellent charities: Acting for Others, Help Musicians and The Golsoncott Foundation, as they help those in need during this time and beyond. We’ve got a huge mix of entertainment planned - from musical theatre to comedy to dance and everything in between and we are really excited to share with you such an eclectic programme of work. At this critical time we ask you to please join our community on the day and support our industry by donating whatever you can. If this crisis has taught us anything, it is that stories and their tellers are intrinsically connected to our shared humanity, stories, no matter the distance, bring us together. The arts will come back swinging after all this is done - but we need your help now to make that happen. Join us on Thursday.”

Joanne Clifton sings Nobody Does it Like Me from Seesaw

Tamaryn Payne reads extract from Letters To The Earth

Noah Thomas sings You Don't Even Know It and The Wall in My Head from Everybody’s Talking About Jamie, and Ordinary People by John Legend and will.i.am

Luke McCall sings Music of the Night from The Phantom of the Opera, Bring Him Home from Les Miserables and Anthem from Chess

Evie Rose-Lane sings Defying Gravity from Wicked, Holding out for a Hero from Footloose and Tomorrow from Annie

Gemma Barnett reprises her Offie Award winning role from A Hundred Words for Snow a new monologue, A message from Rory, written specially for the event by Tatty Hennessy

The Yes Queens perform improvised comedy based on audience suggestions

Vocal Xtr3m3 performs You’re the Voice by John Farnham, a TOTO medley and a Journey medley

Daisy Wood-Davis sings Natural Woman, Will You Still Love Me Tomorrow and Beautiful from Beautiful: The Carole King Musical

Kwami Odoom performs an extract from Anton Chekhov’s The Bear

Cast of Fat Rascal Theatre’s Unfortunate: The Untold Story of Ursula The Sea Witch perform a medley from the show

Marisha Wallace sings And I am Telling You from Dreamgirls, I Know Where I’ve Been from Hairspray and a Whitney Houston Medley

Sadie Clark performs an extract from her play Algorithms

Alice Merivale sings Hard to Be the Bard from Something Rotten! and an original monologue To Wee or Not to Wee

Stephen Fry reads Michael Rosen’s These are the Hands, as the nation turns to #ClapForCarers

Caroline Kay performs original music Can’t Get My Love and Always You and Smile by Charlie Chaplin.

Finn Anderson performs original songs The Wee Hours, A Dancer Stole My Heart and The Garden

Lucie Pohl performs Stand Up Quarantine: How to be Funny When No One’s Laughing

Evangeline Dickson reads All the Web’s a Stage, a new monologue to close the event