A season of Hampstead Classics - News 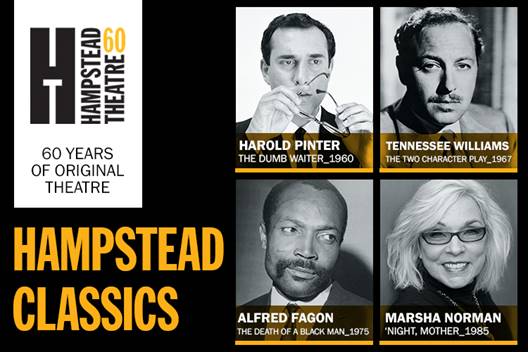 Hampstead Theatre, announces Hampstead Classics, its spring/summer programme, to mark its 60th anniversary and celebrate its ambitious history as a new writing theatre.  Featuring four bold plays from the theatre’s eclectic archive, the productions will be performed in chronological order and staged in the thrust, by a variety of distinctive British directors.

Roxana Silbert, Artistic Director of Hampstead Theatre, said “Selecting only four plays from Hampstead Theatre’s massive backlist of world premieres was a real challenge and it really hit home just what a powerhouse this modest theatre is.  The range, diversity and singularity of the voices is extraordinary, as is how often they bring untold stories into the light.

Hampstead has always supported established writers and launched new ones by creating a space for artists to experiment and be heard.  May the next sixty years continue this wonderful tradition.”

Nobel Prize-winning writer Harold Pinter’s timeless black comedy The Dumb Waiter will open Hampstead Classics, running from 19 March until 18 April.  Originally presented in Hampstead Theatre’s first ever season, The Dumb Waiter was directed by its founder and Artistic Director, James Roose Evans, and received its UK premiere in January 1960.  Alice Hamilton will direct this classic play, often referred to as “Pinter distilled”, after her recent success at the theatre with Every Day I Make Greatness Happen and Paradise.

One of the foremost playwrights of the 20th century, Tennessee Williams’ innovative and partly autobiographical work, The Two Character Play, will run from 24 April until 23 May.  Also originally directed by James Roose Evans, the play received its world premiere at Hampstead in 1967 and Williams openly declared it, “My most beautiful play since Streetcar, the very heart of my life”.  Sam Yates will direct, making a highly anticipated return to Hampstead Theatre following his critically acclaimed production of The Phlebotomist.

Alfred Fagon’s remarkable tribute to the culture of London’s King’s Road in the 1970’s, The Death of a Black Man, will run from 28 May until 27 June.  Fagon was one of the first British black writers to have his work produced in the UK; he was a boxing champion, a welder, an actor, poet, and playwright who died at the early age of 49 (1986).  The Alfred Fagon Award was set up after his sudden death to support British black playwrights and honour his name.  The original production of The Death of a Black Man was directed by Roland Rees in 1975.  Founder and former Artistic Director of Eclipse Theatre Company, Dawn Walton, will direct this complex, rarely produced play by one of Britain’s leading black, working class, immigrant voices from the 20th century.

Legendary American writer Marsha Norman’s ground-breaking play ‘night, Mother will close Hampstead Classics, running from 2 July until 1 August.  The original Hampstead production was directed by its then Artistic Director, Michael Attenborough, giving the play its European premiere in 1985.  This deceptively simple and moving play had already won the Pulitzer Prize for Drama (1983), the Susan Smith Blackburn Award (1982-83) and earned four Tony Award nominations.  After her widespread acclaim, Norman stated, “Now we can write plays and not have people put them in a little box labelled ‘women’s theatre’… it’s a time of great exploration of secret worlds, of worlds that have been kept very quiet.”  Hampstead Theatre’s Artistic Director, Roxana Silbert, will direct this new production.

Hampstead Downstairs, the theatre’s studio space, will continue to support new voices as Hannah Khalil makes her Hampstead debut with the world premiere of Sleepwalking which runs from 26 March until 2 May.  This dark thriller will be directed by Audrey Sheffield, who makes her Hampstead Theatre directorial debut.

Ruby Thomas joins Hampstead to complete her one-year playwright-in-residence attachment, as a Channel 4 Playwrights’ Scheme 2019 winner, which celebrates and supports emerging British writing talent.  She will have the opportunity to meet a variety of theatre practitioners, read scripts as part of Hampstead’s programming team and provide a voice for the writer in the running of the building.  Ruby had recent success with her first play Either, which had its world premiere at Hampstead Theatre.

The Mono Box and Creative Multilingualism will continue to work in-house at Hampstead Theatre as Associate Companies.

After a successful first season working in collaboration, The Mono Box will continue their Speech Share Live events, public recordings of their podcast where actors discuss their careers and perform a favourite monologue.  Previous guests have included Sir Derek Jacobi, Denise Gough, Joseph Marcell, Sir Simon Russell Beale, Gina McKee, Prasanna Puwanarajah and Jenna Russell.  Guests for 2020 will be announced in due course along with other projects.

Using devising techniques, the group will create a piece of performance which incorporates all of their languages and relates to a work within the Hampstead’s season as well as responding to issues important to them.  Sessions will take place every Wednesday after school from mid-January to mid-March.

Hampstead Theatre is marking its 60th anniversary throughout the course of its 2019/2020 season, starting from its birthday on 24 September 2019, through to the end of the summer season 2020.  Celebratory events have already taken place to mark the occasion including a special fundraising event to raise funds for the Under 30s £10 ticket scheme, and the refurbishment and expansion of Hampstead’s Main Stage auditorium.

Roxana Silbert will make her directing debut at Hampstead Theatre with Al Blyth’s new play The Haystack, which runs from 31 January 2020 until 7 March 2020.

Casting for Hampstead Classics will be announced in due course.