Time to change your playlist 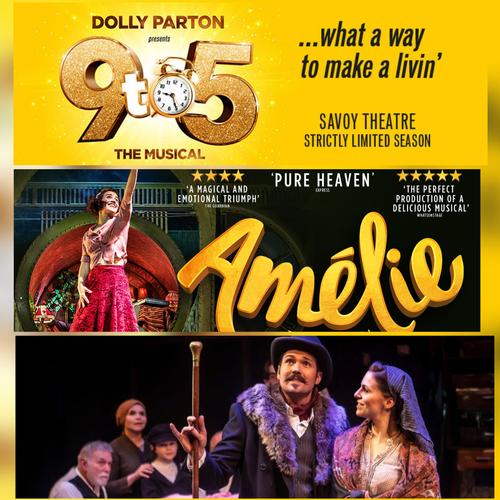 The West End Cast Recording of 9 to 5 is available to stream and download now. It can be found on all streaming platforms including Spotify, Apple Music and Amazon Music.

Recorded live at the Savoy Theatre with the West End cast, led by Caroline Sheen, Amber Davies, Natalie McQueen, Bonnie Langford and Brian Conley, 9 TO 5 THE MUSICAL has a rip-roaring score by the Queen of Country herself featuring Backwoods Barbie, Get Out and Stay Out, Shine Like the Sun and the of course, the title number. It tells the story of three workmates pushed to boiling point by their sexist and egotistical boss. Concocting a plan to kidnap and turn the tables on their despicable supervisor, will the ladies manage to reform their office – or will events unravel when the CEO pays an unexpected visit?

The UK production of Amélie the Musical will release a cast album, the director Michael Fentiman has confirmed on Twitter.

The stage show is based on the 2001 romantic comedy film by Jean-Pierre Jeunet, which was nominated for five Academy Awards and won two BAFTA Awards.

There will also be a cast recording of the production of RAGS The Musical which is currently playing to sold out houses at Park Theatre, London, running until tomorrow, Saturday 8 February. This will be the first recording of the show since Sony’s 1991 album with the Broadway cast.

The Album will be released by Ghostlight/Sh-K-Boom Records (a subsidiary of Warner Music and four-time Grammy Award winners in the Best Musical Theatre Album category for The Band’s Visit, In the Heights, The Book of Mormon and Beautiful: The Carole King Musical), with Stephen Schwartz as Executive Producer, Nick Barstow as Music Producer and Orchestrator and Joe Bunker as Musical Director. The album will be recorded, mixed & mastered by Joe & Nikki Davison at Auburn Jam Music.

Stephen Schwartz said of the recording “I could not be more pleased that this beautifully sung production of Rags is being recorded by this group of terrific actors and musicians.  I and my fellow authors consider ourselves lucky indeed!"