A new musical at the Troubador 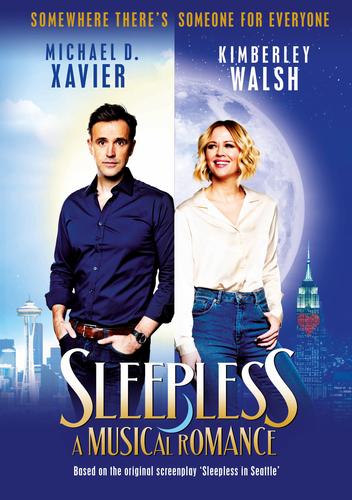 SLEEPLESS, A Musical Romance, based on the original screenplay Sleepless in Seattle, will premiere in London on 31 March 2020 at the newly opened Troubadour Wembley Park Theatre, London.  Tickets will be on sale at 10.00am on Tuesday 10 December.

Performances will begin in 2020 from Saturday 21 March, with a national press night on Tuesday 31 March.

There will be three reduced price preview performances at the Troubadour Wembley Park Theatre on Friday 13 (evening) and Saturday 14 (matinee and evening) December.  Tickets for all three performances are now on sale at £25, £39.50 and £55.

SLEEPLESS is the enchanting new romantic musical comedy based on the original story and screenplay of the romcom classic Sleepless In Seattle. SLEEPLESS tells the heart-warming tale of Sam, who moves to Seattle with his eight year-old son, Jonah, following the tragic death of his wife.  When Jonah phones a radio show, Sam is forced to talk about his broken heart and sleepless nights live on air, and he suddenly finds himself one of the most sought after single men in America and a great news story for feisty journalist Annie on the opposite side of the country. Can Jonah bring the two together on the top deck of the Empire State Building?  A fresh and lively book alongside a brand-new musical score bring this most timeless of romantic comedies to life on stage.

For the three special previews in December, the cast will be led by Michael D Xavier as Sam and Kimberley Walsh as Annie.  The cast will also include Soo Drouet as Becky, Gay Soper as Eleanor, Alex Fobbester as Rob, Dylan Turner as Walter, Vicki Davids as Suzy, Michael Carolan as Gregg, and Jobe Hart as Jonah, with Charlie Bull, Charlotte Gale, Matt Holland, Joanna Rennie, Tyler Smith and Annette Yeo.

The world premiere of SLEEPLESS will be presented by Michael Rose, Encore Theatre Productions Ltd, David Shor in association with Marc Toberoff.  General Manager will be David Pearson.