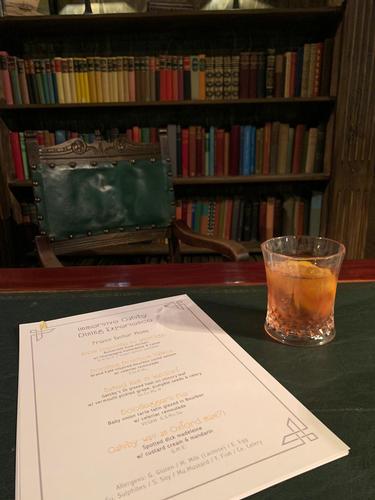 The Guild of Misrule’s THE GREAT GATSBY, created and directed by Alexander Wright, is currently wowing audiences in its brand-new West End venue IMMERSIVE | LDN, continuing its record as the UK’s longest running immersive production.

It’s the roaring twenties – an era of bootleg liquor, red hot jazz and hedonistic pleasures. Jay Gatsby has invited you to one of his infamous parties and that’s not an invite you want to turn down…

THE GREAT GATSBY allows audiences to fully immerse themselves into the world of Jay Gatsby and the glamour of the Roaring ‘20s. With cocktails, dancing and scandal, this heart-racing adaptation of the seminal jazz-age story puts the audience at the heart of the action.

From 13 November, audiences can opt to enjoy a bespoke fine dining experience, designed by Immersive LDN catering partners Flavourology, who will also be designing and producing the food element for all other events in the venue going forward.

Jenny McNeill, food director of Flavourology “We are so excited for audiences to enter Jay Gatsby’s dining room and be enthralled by a menu referencing this literary classic. Hosted by Gatsby’s faithful butler, we will bring you dishes inspired by the places Jay and Daisy met and lived, truths or fables from Gatsby’s past, and ingredients popular in the roaring 1920s.”

With a menu that includes dishes inspired by The Great Gatsby including an amuse-bouche made of buttermilk fried chicken with champagne hollandaise and caviar ‘From St Louis to West Egg’, a main of bourbon cured salmon with celeriac puree and remoulade ‘Bootleg Bourbon Salmon’ and a pudding of spotted dick under a white chocolate dome with custard parfait and salted caramel source ‘Gatsby was an Oxford Man’ (all with vegan alternatives), audiences will begin their journey into the world of Jay Gatsby with an unforgettable edible adventure.

Tickets for the dining experience will go on sale on Thursday 31 October and can be purchased via  www.immersivegatsby.com, with the first service taking place on Wednesday 13 November.

Producers Louis Hartshorn and Brian Hook, who are currently co-producing the immersive production of THE WOLF OF WALL STREET – have launched a new company IMMERSIVE EVERYWHERE, entirely dedicated to developing and staging theatre-led immersive experiences, and IMMERSIVE | LDN is the newest of their network of venues, which will house cafes, bars and rehearsal and workshop spaces to help the development of new work.

IMMERSIVE | LDN is a 32,000sq ft historic building in the heart of Mayfair, which was home to the Queen Victoria’s Rifles Association until 2017. It includes three floors of immersive theatre and event spaces designated for performance, live gaming, events, escape rooms and private parties. For information about programming and venue hire visit www.immersiveldn.com