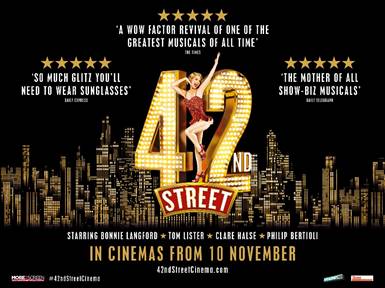 More2Screen today announces the cinema release of the critically acclaimed West End revival of Michael Stewart and Mark Bramble’s 42nd Street which will be screened in more than 550 cinemas across the UK and Ireland from 10 November 2019.  This legendary musical stars national treasure Bonnie Langford as Dorothy Brock with music and lyrics by Harry Warren and Al Dubin. Cinema tickets are on sale now at 42ndStreetCinema.com

42nd Street tells the story of Peggy Sawyer, a talented young performer with stars in her eyes who gets her big break on Broadway. This is the largest ever staging of the Tony Award-winning musical, and featuring iconic songs 42nd Street, We’re In The Money and Lullaby Of Broadway, this is pure musical magic on the big screen.

The stage production was produced by Michael Linnit and Michael Grade. It was filmed live for the cinema screen at the Theatre Royal, Drury Lane in November 2018 by BroadwayHD, the US-based streaming service for live theatre. Ross MacGibbon directed the filmed version in collaboration with the late Mark Bramble, filming in 4K with 8 cameras at three separate performances to capture the spectacular scale of the stage show.

Bonnie Langford today said, I’m so proud that this great production is now going to be screened in cinemas, reaching more people across the UK and Ireland than ever before. 42nd Street has been a part of my life since my twenties when I first played Peggy Sawyer and then a whole 25 years later I returned as Dorothy Brock to Theatre Royal Drury Lane. It feels like the perfect conclusion to a joyous run.”

Christine Costello, CEO and Founder of More2Screen added, “42nd Street is one of the all-time great Broadway musicals and we're delighted to be bringing this fabulous West End revival to cinema audiences all across the UK and Ireland."