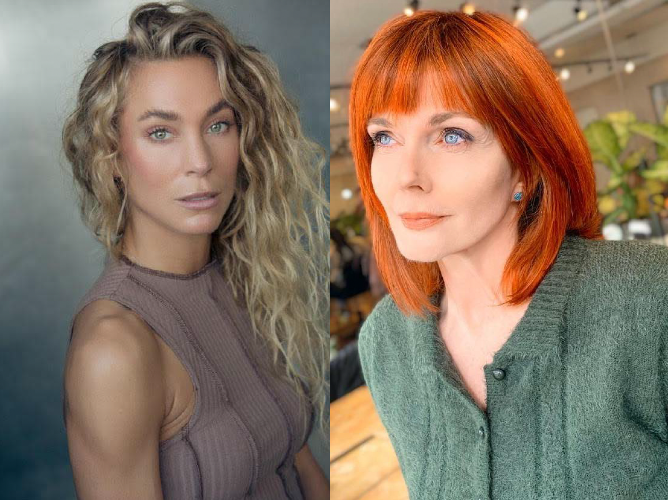 Jodie Steele’s major musical theatre starring roles include Heather Chandler in ‘Heathers’ in the West End and Katherine Howard in ‘Six the Musical’, Sheila in ‘Hair’, Sherrie in ‘Rock of Ages, alternate Elphaba in ‘Wicked’, Carmen Diaz in ‘Fame’ and Margot in ‘Legally Blonde’.

Annabel Giles has been a model, actress and best-selling novelist, but is probably most known as a TV presenter on many shows, such as ITV’s ‘Posh Frocks and New Trousers’ and most recently ITV2’s ‘My Shirley Valentine Summer’, aired in 2018. Annabel guessed a Gotcha! on ‘Noel’s House Party’ and was a contestant on the 13th season of ‘I’m a Celebrity...Get Me Out of Here!’. She has also appeared in two sell-out one-woman shows at the Edinburgh Fringe. Annabel also works as a counsellor/psychotherapist in private practice, and is a tutor at Dunamis Counselling College.

‘Rehab The Musical’, a rock-bottom-to-redemption journey of the soul filled with thumpingly
memorable songs, premieres at The Playground Theatre 1 – 17 September, 2022.


It’s 1999 and jaded 26-year-old pop star, Kid Pop, finds himself in court, after being caught red
handed in a drug fuelled tabloid sting. An understanding judge gives Kid the choice between jail time or six weeks in a rehabilitation centre. It seems a no-brainer: rehab will be a holiday. But how could Kid have got it so wrong?

‘Rehab The Musical’ will sweep audiences up on an emotional journey of the soaring highs and tragic lows of the ‘guests’ of the Glade Rehab Centre.

It has music & lyrics by Grant Black and Murray Lachlan Young, a book by Elliot Davis, and is directed and choreographed by Gary Lloyd (‘Thriller Live’ - 12 years in the West End, ‘Heathers’). Produced by Blacklist Entertainment.

Thirty-five years ago, songwriter Grant Black (Van Morrison, Run DMC, Craig David), found himself in emotional turmoil after a painful divorce and a growing cocaine habit. Grant, the son of legendary Oscar-winning lyricist Don Black, was determined to not let the drugs that were everywhere consume him and he took his future by the scruff of the neck and checked himself into rehab.

What he found there astonished him: people with issues with drugs, alcohol, shopping, gambling, food and sex, and that just barely scratched the surface. Soon Grant began to witness first-hand the brutal honesty, heartbreak, love, bravery, and truth that accompanies such traumatic affliction.

Fast forward 10 years, and Grant met up with superstar poet Murray Lachlan Young, “a Noël Coward for the Noel Gallagher generation”, and a man whose own life had come crashing down around him: the phone had stopped ringing, he slipped into depression, suffered writer’s block, plus a host of other issues left him  spiralling into oblivion. Grant and Murray proved to be the perfect foil for each other’s neuroses. Inspired by the need to bring a positive and honest message to the stage by
intertwining their own personal stories and experiences, they joined forces with Olivier nominated musical script writer Elliot Davis, who also happened to be a psychotherapist specialising in addictions and trauma, and together they set out to write ‘Rehab The Musical’.