Wonderville is back - News

A new destination in the West End 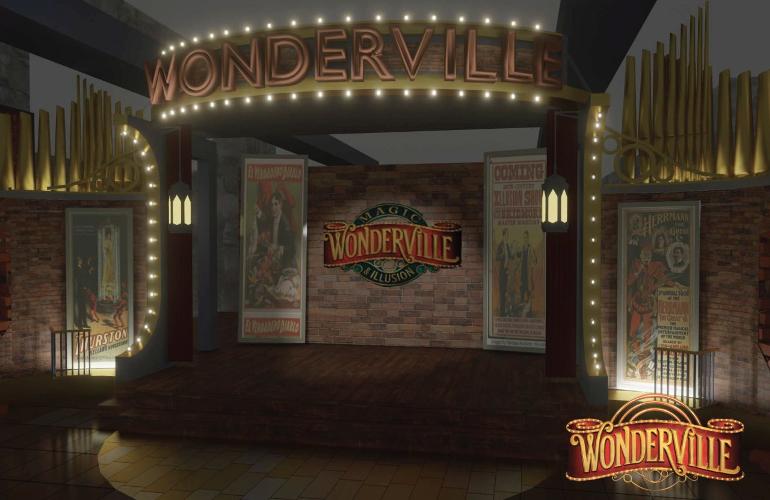 Following that smash-hit season – watched by over 25,000 people – the producers of ‘Wonderville: Magic & Illusion’ introduce the latest addition to the UK’s premier magic brand in the heart of the West End with Wonderville, where audiences will become immersed in a purpose-built intimate cabaret table seated venue at 57-60 Haymarket (formerly Planet Hollywood), just 2 minutes from
Piccadilly Circus.

Not only the stages but the whole bar, theatre and cafe will be designed in the world of Wonderville by seven times Offie-nominated Justin Williams (‘Wonderville: Magic & Illusion’, ‘Death Drop’, ‘Soho Cinders’). Walk through the doors and you will immediately be greeted by magic, mystery and the unexpected.

Wonderville will be open as a café and bar from 12noon - 12am, with performances from Tuesday – Sunday at 8pm and weekend matinees at 3pm. It will be the perfect hang out space in the day, but when night falls, prepare for surprises and marvel at any time when you are in the world of Wonderville…
From their extensive experience travelling the world and performing with the greatest magic and cabaret acts, Creative Director Laura Corcoran, aka Frisky from Frisky & Mannish (La Soiree, Palazzo
Berlin, Briefs Sweatshop), and Magic Consultant Chris Cox (‘The Illusionists: Magic of the Holidays’ on Broadway, ‘The Illusionists’ at Sydney Opera House and ‘Wonderville: Magic & Illusion’, West End) are bringing together some world-class talent from right on our doorstep.

At each show, a rotating rosta of fabulous hosts and acts will take you on a trip “to a place of wonder” (BroadwayWorldUK) in a breathtaking display of magic and cabaret that will entertain, delight and amaze.

Stay tuned to the Wonderville social media channels as more incredible acts are revealed, including many from the five-star ‘Wonderville: Magic & Illusion’. The hosts include Chastity Belt, Desmond O’Connor and Mysti Vine.

Laura Corcoran said: “Expect the weirdest, wildest, most wonderful acts of the London variety scene entertaining you from every corner of Wonderville. You cannot be anything but utterly wowed by these hilarious and stunning talents. It will be a night of true wonderment... and anything could happen!”

Wonderville will open its doors for the first time on Tuesday 9 August with the opening show, ‘Wonderville: Magic & Cabaret’, having an initial booking period to 30 October.