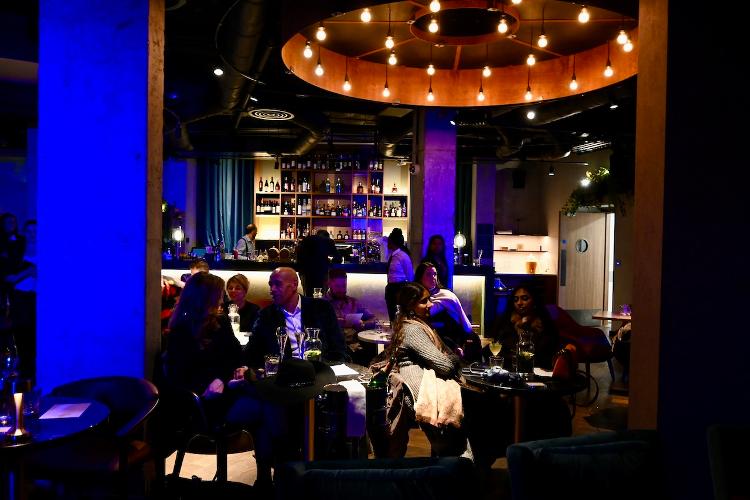 QT’s sultry and seductive ambience and incredible roster of talent have seen it claim its place as one of London’s most acclaimed live music venues. Regular residency, QT  Presents Leo Green, continues to electrify audiences every Thursday, Friday and  Saturday, complemented by guest performances by the likes of Ray Gelato and Riva  Taylor. From this month onwards, audiences are in for even more of a treat as this contemporary take on the classic speakeasy spreads its musical wings with an eclectic new line-up that is sure to entice both regulars and newcomers alike to hotfoot it below the bustling streets of Covent Garden.

All forming part of the QT Presents roster, the second and fourth Monday of each month,  from 13th June onwards, will see some of London’s brightest musical stars invite you to join their West End Cast Party. And with QT located in the heart of London’s theatreland,  what better spot could there possibly be?!

Our host is the legendary Emma Hatton, whose soaring voice and magnetic stage presence in West End roles as diverse as Evita’s Eva Peron (in 2019 she was chosen to perform the role in the BBC documentary celebrating 40 years of the much-loved musical), Elphaba in Wicked and Scaramouche in We Will Rock You, have attracted a  global fanbase.

From 14th June, and thereafter on the second and fourth Tuesday of each month, there’s a change of tempo with The Ultimate R&B and Soul Show. In a unique show that will have you dancing in your seats, the cream of the UK’s soul, R&B and funk musicians put their own spin on classic tracks by some of the best-loved artists of all time, from Marvin  Gaye and Stevie Wonder to Boyz II Men and Luther Vandross.

Complementing these regular outings, each month will also find QT hosting a number of  eagerly anticipated one-off showcases by a marvellously diverse array of performers.

On 15th June, QT Presents Stringfever will see the venue welcome the most entertaining electric string quartet on the planet. Meet Giles, Ralph, Graham and Neal who with their exceptional musical skills, unrelenting energy and engaging personalities take their audience on a unique musical journey, the climax of which is 40 numbers packed into a  frenetic five-minute finale!

QT Presents Velma Celli meanwhile finds the drag superstar taking centre stage on 22nd June. The alter-ego of West End performer Ian   Stroughair (Cats, Fame, Chicago, Rent), Velma’s triple threat of heavenly vocals, theatrical swagger and razor-sharp wit has charmed audiences around the globe. From hysterical impressions of divas like Britney Spears and Cher to stripped back acoustic arrangements of classic pop and jazz tracks - not to mention a sing-along or two - prepare to laugh, cry and above all, be thoroughly entertained!

Things continue to heat up in July as Divas! take over the basement on the second and last  Wednesday of each month. Join us from 4th July as we worship at the altar of iconic goddesses of pop and soul as interpreted by West End favourite  Natalie May Paris (Jane Seymour in the smash-hit  West End production of Six) who will be belting out the hits of Mariah, Aretha, Whitney, Diana and many, many more.

On 6th July, QT Presents Clare Teal sees a special evening comprising two shows by one of the UK’s most beloved vocal talents, not to mention popular Jazz FM broadcasters. With 14 acclaimed albums to her name, Clare’s stunning voice, encyclopaedic knowledge of jazz, swing and big band music and innate warmth and wit put her in a class of her own.

Last, but by no means least, expect some classic Las Vegas-style swinging entertainment from singer/saxophonist Ray Gelato and his band, returning by popular demand on 20th July.

All the QT Presents shows have two performances, at 7pm and 9pm. Tickets are priced from £10 (bar Clare Teal and Ray Gelato from £20) and bookings can be made at  www.middleeight.com/qt-bar/qt-presents.