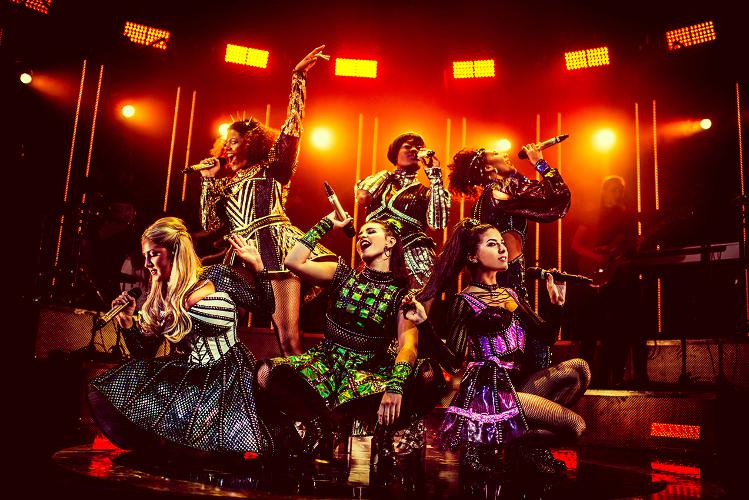 The producers of SIX the Musical have announced that the original principal cast members of SIX will remain in (re)formation following next month’s sold out, open-air performances at Hampton Court Palace, swapping the cobblestones of their infamous ex-husband’s courtyard for the silver screen, with a cinematic capture of the production to be filmed at the Vaudeville Theatre.

The film, recorded for future release, will immortalise the hit West End production and feature the original West End Queens Jarnéia Richard-Noel (Catherine of Aragon), Millie O’Connell (Anne Boleyn), Natalie Paris (Jane Seymour), Alexia McIntosh (Anna of Cleves), Aimie Atkinson (Katherine Howard) and Maiya Quansah-Breed (Catherine Parr). Since the show’s first full run at the Arts Theatre in 2019, the ‘OG’ Monarchs have become synonymous with the show, earning an Olivier Award nomination for their roles, and winning a legion of loyal fans for their royal portrayals.

From Monday 27 June, performances of SIX at the Vaudeville will be suspended for four nights to create a film that combines the best elements of live theatre and cinema, culminating in a performance on Friday 1 July for the show’s biggest fans - the Queendom.
The film of SIX will be directed by Liz Clare, who most recently directed Adele - Live at the London Palladium.

A limited number of tickets for the performance on Friday 1 July will be made available to purchase via a public ballot, which opens at 10am on Friday 10 June via the production’s social media channels. Lucky winners will be given the opportunity pose on the purple carpet, pose for photos, and be part of SIX history - the ultimate bragging rights to the show’s most ardent fans.

Creators of SIX Toby Marlow and Lucy Moss said: “Having our original Oliviers cast captured on film is just such an exciting, mind-blowing prospect. We are so thrilled that we are finally going to be able to share their incredible performances of our show with the whole world! Live captures are SUCH an important part of the world of theatre accessibility today - and we are so very grateful that we get this opportunity to share the six queens’ story this way.”

The seating capacity of the Vaudeville Theatre will be reduced to allow for the camera and sound equipment necessary to capture the performance. Some sightlines may be affected, and access seats will remain available for patrons who require them, subject to availability.

SIX, which now has productions in London, on Broadway (for which it recently received eight Tony Award nominations), and tours across the UK, North America and Australia, is produced by Kenny Wax, Wendy and Andy Barnes, and George Stiles.

Performances at the Vaudeville Theatre, featuring the reigning West End cast will resume on Saturday 2 July.