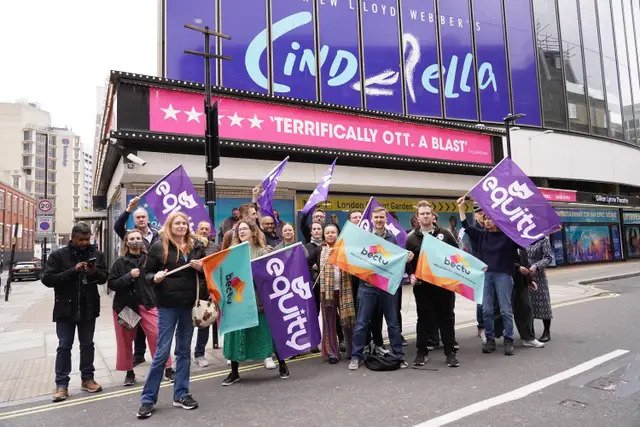 Cinderella musical’s actors organised a protest against Andrew Lloyd Webber’s decision to close the show and to demand the actors are paid for their full contract.

Around 60 activists from the Equity and Bectu unions held the demonstration outside the Gillian Lynne Theatre in the West End.

Andrew Lloyd Webber's show will end on 12 June, it was announced on Sunday.

But some cast members said they read the news on social media or news outlets before being told themselves.

Lord Lloyd Webber's Really Useful Group said efforts were made to "ensure that the message was distributed as widely as possible as quickly as possible".

The theatre impresario said he was "incredibly proud" of the show but has not yet personally commented on the complaints about how the announcement was handled.

Equity general secretary Paul W Fleming said: 'Equity members made this show. They poured their hearts and skills into it through the worst two years in living memory. Now they're jobless, effectively sacked by press releases.

'All unions are fighting forms of this practice right now - and Equity will get compensation for our members after the pain and distress this has caused them.'

The union is demanding current cast members receive the full value of their contracts until they are due to end on July 17 and that those who were due to join the cast at the beginning of June get 'adequate compensation'.

The closure comes amid reports that the show was suffering financially week-on-week during its West End run - eventually culminating in losses of some £2million.