The play is back 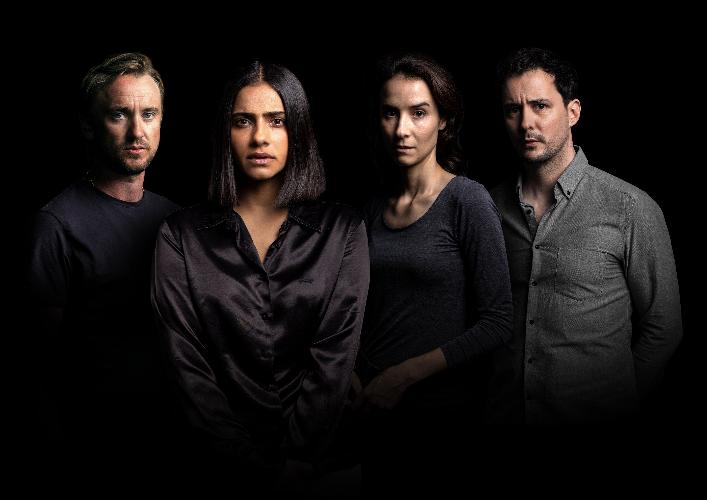 Producer Runaway Entertainment is delighted to announce casting news for the transfer of Danny Robins’ edge-of-your-seat, supernatural thriller 2:22 - A Ghost Story for a third season to the Criterion Theatre. The run at the Criterion follows two record breaking runs at the Noel Coward and Gielgud Theatres and three Olivier Nominations including Best New Play as well as winning the Best New Play category in the Whatsonstage awards.

Tom Felton will play the role of Sam. Having made his breakthrough as ‘Draco Malfoy’ in the Harry Potter series of films, Tom has gone on to star in award winning films The Rise of the Planet of the Apes, A United Kingdom, and Belle, television series The Flash, Netflix filmThe Forgotten Battle and was most recently seen on screen in SKY’s Save the Cinema. Coming up, he will star in Independent Film Burial.

Tom Felton said: “I’m incredibly excited about getting to play in 2:22. I first started acting age 6 in a local theatre group and I haven’t trodden the boards since. I love the play, I’ve taken all my family to see it & everyone leaves with a smile. I’m thrilled to be part of this summers cast and will have a lot of fun with it.”

Mandip Gill will play Jenny. Mandip played companion Yasmin Khan in series 11, 12 and 13 of Doctor Who opposite Jodie Whittaker. She also played Phoebe McQueen in Hollyoaks and has appeared in Cuckoo, Doctors, The Good Karma Hospital and Casualty.

Mandip Gill said: “I am thrilled to be making my West End debut as part of the new cast of an already successful show. I am equally scared of ghosts so this should be fun”

Beatriz Romilly will play the role of Lauren. Beatriz was born in Spain. She is best known for her work in Assassin's Creed Valhalla, Final Fantasy XIV: Shadowbringers and War of the Worlds. She has also appeared on stage at Chichester Festival Theatre, Shakespeare’s Globe and The Bush Theatre.

Beatriz Romilly said: "I’m delighted to be returning to London and joining the new 2:22 company. I feel very lucky to be working with Matthew Dunster again, and getting a chance to dive into Danny Robins nail biting script with such a wonderful creative team and cast.”

Sam Swainsbury will play Ben. Sam is known best for his roles as Jason in the BBC sitcom Mum and Rowan in the 2019 film Fisherman's Friends. In 2015, Swainsbury featured in the film Thor: The Dark World, In 2017, Swainsbury appeared on Fearless, In 2019, he appeared in Victoria as Dr John Snow.

Sam Swainsbury said: “It's such a privilege to be joining the 2:22 company! I was really drawn to the script. It's engaging, funny, exciting and poignant, but… there was something else. Something I can’t put my finger on. Drawing me to it. Almost like… like a voice. From another place. That’s normal, right?!”

Matthew Dunster said: “Planning our 3rd iteration of 2:22 has been just as exciting as the first two; working with Danny and my Co-Director, Isabel Mar, and our brilliant casting directors to re-imagine the characters once more. It’s such a privilege to do that and to know audiences are excited about ‘who’s next?’  We have a wonderful cast that once again is loaded with surprise, excitement and West End Debuts. People love watching this show and we love making it.”

After breaking all box office records for a new play at the Noel Coward Theatre; described as the theatre event of the year and the hottest ticket in the West End; and after weeks of sell-out performances, the show transferred for another record breaking run at the Gielgud Theatre. The run there ended in February and a third season, this time to the Criterion Theatre, was immediately announced.

2.22 - A Ghost Story is written by award-winning writer Danny Robins, creator of the hit BBC podcast The Battersea Poltergeist and it is directed by Matthew Dunster. Intriguing, funny and scary, it takes audiences into one adrenaline fueled night where secrets will emerge and ghosts may appear….What do you believe? And do you dare to discover the truth?

Jenny believes her new home is haunted, but her husband Sam isn’t having any of it. They argue with their first dinner guests, old friend Lauren and her new partner Ben. Can the dead really walk again? Belief and scepticism clash, but something feels strange and frightening, and that something is getting closer, so they are going to stay up… until 2.22am… and then they will know.

Danny Robins said "I'm overjoyed to have a cast of this outrageously exciting calibre for our new season. Tom and Mandip are stellar talents who I have admired for years, Sam is awesome and will be known and loved by comedy fans and Beatriz is someone I know is bursting with ability and on the cusp of stardom. Each new cast unlocks new surprises and thrills for me as a writer, each actor bringing their own distinctive take to the play. If you haven't seen 2:22 before, there's never been a better reason to come, if you have seen it, come back and see it again with this exciting line-up!”

2:22 - A Ghost Story is produced by Tristan Baker and Charlie Parsons for Runaway Entertainment, Isobel David and Kater Gordon.