Six the Musical to be staged at Hampton Court Palace 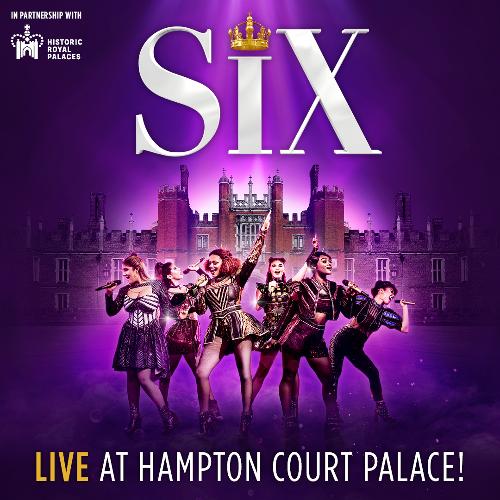 This production, staged in partnership with Historic Royal Palaces – the independent charity which cares for Hampton Court Palace - will see the global musical phenomenon staged outdoors for the first time, in front of an audience of over 3,000 at each performance.

The production will be co-directed by Lucy Moss and Jamie Armitage, with choreography by Carrie-Anne Ingrouille, musical supervision by Joe Beighton and costumes by Gabriella Slade based on the original staging with Scenic Design by Emma Bailey, Lighting Design by Tim Deiling, Sound Design by Paul Gatehouse and Orchestrations by Tom Curran.

Speaking about SIX Live at Hampton Court Palace, producers said: “We are delighted to be working in partnership with Historic Royal Palaces and reuniting our original West End Queens for three performances. While SIX continues to triumph worldwide, we are thrilled to be celebrating this home-grown musical and staging it within the beautiful grounds of Hampton Court Palace this summer.”

Liz Young, Head of Events at Historic Royal Palaces, said: “Bringing the phenomenon that is SIX to Hampton Court Palace has been a long-term aspiration, and we’re delighted that this summer loyal fans and newcomers alike will get the chance to experience the award-winning show in the very place where the lives, loves and legacies of these legendary Queens live on.”

SIX has become a global phenomenon since its debut as a student production at the Edinburgh
Fringe Festival in 2017. Since then, and following the reopening of theatres across the world,
performances have resumed in London’s West End, on Broadway and in Sydney (as part of an Australia anNew Zealand Tour), with a brand-new production opening in Chicago later this month, and a second North American Tour due to open in July.

The music from SIX has also achieved global prominence, with its hit songs streamed over 340 million times across all platforms, with over 2 million views on YouTube and 3 billion views on TikTok, making it one of the world’s most successful cast recordings in music history. In October 2021 the original studio cast recording was officially awarded Gold status, in an event streamed globally, live on TikTok.