The new cast has been announced 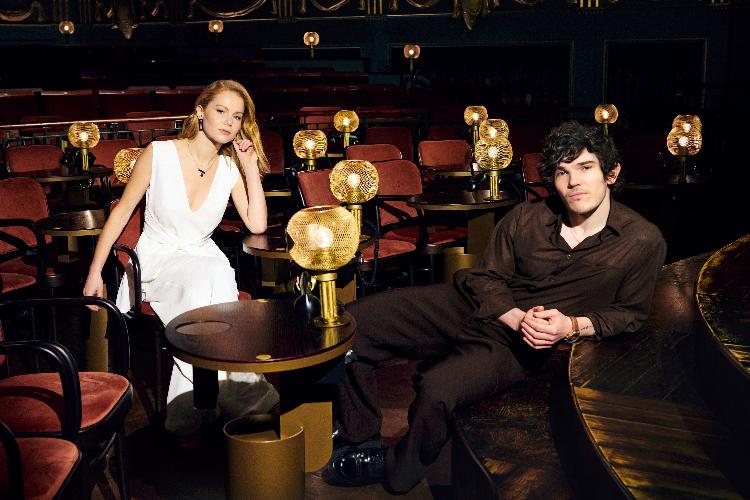 The new cast of Cabaret has been announced.

Fra Fee will play ‘The Emcee’ and Amy Lennox will play ‘Sally Bowles’ from 21 March – 25 June 2022. This unique production opened in December last year to critical and audience acclaim, widely praised as the ultimate theatrical experience.

Adam Speers, Ed Bartlam and Charlie Wood, the producers of Cabaret at the Kit Kat Club said today “We are thrilled to be welcoming the perfectly marvellous Fra Fee and Amy Lennox to our production of Cabaret. We wanted to recast these career defining roles with exceptional actors and so we’re just delighted that the stars have aligned with both Fra and Amy’s schedules.  We couldn’t have asked for a more exciting and thrilling duo to follow Eddie and Jessie.”

Director Rebecca Frecknall said today “It's always exciting to be able to keep a production live and evolving across its run, to be able to continue digging into the piece and making new discoveries. The fact that we will have new actors taking on the roles of Sally and the Emcee as Cabaret continues to run in the West End is thrilling, the original cast passing the baton to different actors who will bring their own perspectives to the work. I'm thrilled that Fra Fee and Amy Lennox will be the first new pair joining the production this Spring, two of our most exciting stage and screen actors. I know they will bring new creative energy to the production and will show me and our audiences new facets of the show.”

Fra Fee most recently starred as Kazi in the hit Disney+ series Hawkeye, set in the Marvel Cinematic Universe. He created the role of Michael Carber in the award-winning play The Ferryman at the Royal Court, the Gielgud Theatre in the West End and the Bernard B. Jacobs Theatre on Broadway. His other theatre credits include Owen in Translations and Amiens in As You Like It, both at the National Theatre and the title role in Candide at the Menier Chocolate Factory. He played Courfeyac in the film of the musical Les Misérables and also appeared in the stage production at the Queen’s Theatre.

Amy Lennox received an Olivier nomination for Best Actress in a Supporting Role in a Musical for her portrayal of Lauren in the West End production of Kinky Boots. Her other credits include Ellie in the London premiere of the David Bowie and Enda Walsh musical Lazarus. She was in the original West End cast of the musical Legally Blonde and created the role of Doralee in the original UK production of 9 to 5 The Musical.

Fra and Amy appeared together in the critically acclaimed production of The Last Five Years in Belfast.

Also joining the production on 21 March 2022 will be Omar Baroud as ‘Cliff Bradshaw’ and Vivien Parry as ‘Fraulein Schneider’. Continuing in their roles will be Elliot Levey as ‘Herr Schultz’, Stewart Clarke as ‘Ernst Ludwig’ and Anna-Jane Casey as ‘Fraulein Kost’.

Omar Baroud (Cliff Bradshaw) is soon to appear in the series Wedding Season for Disney+. His other TV credits include Baptiste for the BBC and The Innocents for Netflix. His theatre credits include You Bury Me for Paines Plough, As You Like It at the Watermill Theatre, A Song at Twilight at the Theatre Royal Bath and All Places That The Eye of Heaven Visits at Shakespeare’s Globe.

Vivien Parry (Fraulein Schneider) has appeared in many West End productions including Madge Hardwick in the original cast of Top Hat at the Aldwych Theatre, Madame Thénardier in Les Misérables at the Queen’s Theatre, Donna in Mamma Mia! at the Prince of Wales Theatre and Mrs Walshingham in Half A Sixpence at the Noel Coward Theatre. Vivien’s other credits include Twelfth Night and The Shoemaker’s Holiday, both for the Royal Shakespeare Company and Celia in The Girls at Leeds Grand Theatre.

Elliot Levey (Herr Schultz) most recently appeared in Nine Lessons and Carols at the Almeida where he also appeared in Three Sisters. His other theatre credits include the West End productions of Mary Stuart at the Duke of York’s Theatre, The Ruling Class at Trafalgar Studios and Much Ado About Nothing at the Wyndham’s Theatre. His National Theatre credits include The Habit of Art and His Dark Materials.

Stewart Clarke (Ernst Ludwig) most recently appeared in Be More Chill at The Other Palace. His West End theatre credits include Fiddler on the Roof at the Playhouse Theatre and Loserville at the Garrick Theatre. He also appeared in Assassins at the Menier Chocolate Factory and The Rink at the Southwark Playhouse.

Anna-Jane Casey (Fraulein Kost) was most recently seen in Girl from the North Country at the Gielgud Theatre in the West End. Her other West End credits include Mrs Wilkinson in Billy Elliot at the Victoria Palace and Lady of the Lake in Spamalot at the Playhouse Theatre. She played Dot in Sunday in the Park with George at the Menier Chocolate Factory, Mabel in Mack and Mabel at the Watermill Theatre and the title roles in Piaf and Sweet Charity and Violet Butterfield in Flowers for Mrs Harris, all at the Sheffield Crucible.

In a time when the world is changing forever, there is one place where everyone can be free… Welcome to the Kit Kat Club, home to an intimate and electrifying new production of CABARET. This is Berlin. Relax. Loosen up. Be yourself.

The Kit Kat Club has laid siege to the Playhouse Theatre. The performers have infiltrated the premises. The artists have staked their claim. Who knows for how long they’ll stay, but for now they are enjoying the party. The party at the end of the world.

Transforming one of London’s most famous theatres with an in-the-round auditorium and reimagined spaces, before the show guests are invited to enjoy and explore the Kit Kat Club with pre-show entertainment, drinks and dining all on offer. When booking, guests receive a 'club entry time' to allow enough time to take in the world of the Kit Kat Club before the show starts. But of course, the show really starts when you first join us in the club…

One of the most successful musicals of all time CABARET features the songs Wilkommen, Don’t Tell Mama, Mein Herr, Maybe This Time, Money and the title number. It has music by John Kander, lyrics by Fred Ebb, book by Joe Masteroff. Based on the play by John Van Druten and stories by Christopher Isherwood.

CABARET is directed by Rebecca Frecknall (the Almeida’s Olivier Award winning Summer and Smoke, The Duchess of Malfi, Three Sisters), set and costume design is by Tom Scutt (A Very Expensive Poison, Constellations, King Charles III, Jesus Christ Superstar, collaborations with Sam Smith, Christine and the Queens) with choreography by Julia Cheng (founder of the House of Absolute, Philharmonia Orchestra Artist in Residence, recipient of the runner-up prize for Hip Hop Dance futures, Resident Choreographer for the Royal Academy of Dance, Judge and mentor for BBC Young Dancer and Breakin’ Convention – the UK’s biggest Hip Hop Festival, collaborations with London Fashion Week, Google and Dr Martens). Musical supervision and direction is by Jennifer Whyte (Les Misérables film, Caroline Or Change, Parade). Lighting design is by Isabella Byrd (Heroes of the Fourth Turning and Light Shining in Buckinghamshire – both in New York, Daddy – A Melodrama at the Almeida and The Flick at the National theatre) with sound design by Nick Lidster (City of Angels, Passion, Pacific Overtures and Parade at the Donmar Warehouse, Sweeney Todd and On The Town for English National Opera, A Chorus Line, Les Misérables and Miss Saigon). The casting director is Stuart Burt (& Juliet, The Drifters Girl and 2021 CDG Award for Best Casting in Theatre for Cyrano De Bergerac) and the associate director is Jordan Fein.

Tickets for CABARET at the KIT KAT CLUB are currently on sale until October 2022. kitkat.club