The cast of Zorro - News

The show will open at the Charing Cross theatre 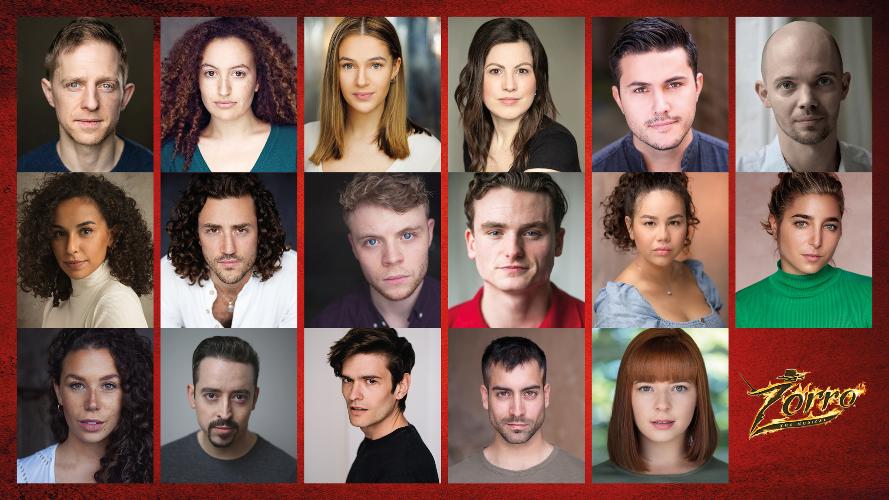 The full cast for newly reimagined Zorro The Musical by Stephen Clark and Helen Edmundson, featuring music by the Gipsy Kings and John Cameron, with lyrics by Stephen Clark, has been announced.

Set in the sizzling heat of 1805’s California, a pueblo is under attack from its autocratic leader. When the danger is at its greatest, a masked crusader appears from nowhere and saves lives. Who is he? Will he be their champion?

The famous red-hot tale of the masked hero, El Zorro, fighting for justice and freedom is told in an immersive, thrilling and headily sensual new production. With zealous, ‘get-on-your-feet’ music, featuring international hits by Gipsy Kings including Bamboleo, Baila Me and Djobi Djoba, alongside original music to express a fresh new tale of love, hope and courage.

Audiences will be seduced into the story and witness the thrills and spills of our hero as he battles for all he holds dear. Spanish Gypsy pride and fire runs deep throughout this explosive show with murderous encounters, immeasurable flamenco choreography and Cante jondo singing at its forefront.

John Cameron’s orchestration credits include Les Misérables – New York Drama Desk Award, Honk! (The Ugly Duckling) – Olivier Award for Best Musical, and Peter Pan (Royal Festival Hall). His musical supervision and arrangement credits include Joseph and the Amazing Technicolor Dreamcoat, The Goodbye Girl, The Card, Blondel, Mutiny!, Spend! Spend! Spend! (Best Musical – Evening Standard Awards). As a composer his credits include Faust Part I and Part II (RSC), Hamlet, Becket and Twelfth Night (National Theatre international tours). For television his work includes scores for Jack the Ripper and Jekyll and Hyde, and the theme for BBC’s Crimewatch UK; and his film scores include A Touch of Class - Oscar Award nomination for Best Music and Original Dramatic Score, Kes and To End All Wars.

Ajjaz Awad is part of the ensemble for the company. Her recent theatre credits include The Snow Queen (South Street Theatre), There’s a Rang-Tan in my Bedroom (The Little Angel Theatre), How Not To Drown (Traverse Theatre) and Another Star to Steer (Brighton Dome). Her television credits include Doctor Who and Hindsight.

Amy Bastani reprises her role in the ensemble continuing her professional stage debut with the company.

Ben Boskovic returns to the company as part of the ensemble. Other theatre credits include The Misadventures of Robin Hood (UK tour), Aladdin (Sutton Coldfield Town Hall), The Exonerated (Hope Mill Theatre), The Secret Garden (Barn Theatre), Holding the Man (Above the Stag) and Paper Hearts: A High-Street Musical (Upstairs at the Gatehouse/First Stage, Hamburg).

Maxwell Griffin makes his professional stage debut as part of the ensemble.

Matthew Heywood returns to the company as part of the ensemble. His theatre credits include Peter Pan, Beryl and Seagulls (Octagon Theatre).

Jessica Lim is part of the ensemble for the company. Her theatre credits include The Musical That Goes Right (Cockpit Theatre), Mario: A Super Musical (Union Theatre), and Medusa: The Legend (Above the Stag Theatre).

Marc Pickering plays Garcia. His theatre credits include BASKERVILLE! (Mercury Theatre), The Elephant Man (Trafalgar Studios), Honeymoon Suite (Hull Truck Theatre), Merchant of Venice (Arcola Theatre), The Return of the Soldier (Hope Mill Theatre), The Toxic Avenger, Suessical, Bananaman, (Southwark Playhouse), How To Succeed in Business Without Really Trying (Wilton’s Music Hall), An Incident At The Border (Trafalgar Studios 2), The Wizard of Oz (Royal and Derngate), Mothergoose (Marlowe Theatre), The Long and The Short and The Tall, Dead Live! (Pleasance Theatre), As We Forgive Them (E.R.T Company) and Dick Whittington (Milton Keynes Theatre). His television credits include Josh, Borgia III, Dalziel and Pascoe, Cricklewood Greats and Which is Witch and for film; Les Miserables, To Be Someone, Brothers of Italy, The Krays: Dead Man Walking, A Viking Saga: The Darkest Day, Kill Keith, The Task, I Want Candy, Cashback, Calendar Girls, Secret Passage and Sleepy Hollow.

Stylianos Thomadakis returns to the company as part of the ensemble. Other theatre credits include The Thorn of Acacia (White Bear Theatre). His films credits include Mary Queen of Scots, Artemis Fowl and Enola Holmes 2.

Hannah Woodward is part of the ensemble for the company. Her theatre credits include Cinderella and Snow White and the Seven Dwarfs (Hartlepool Borough Hall)