Hairspray, Dreamgirls, a tour and much more... 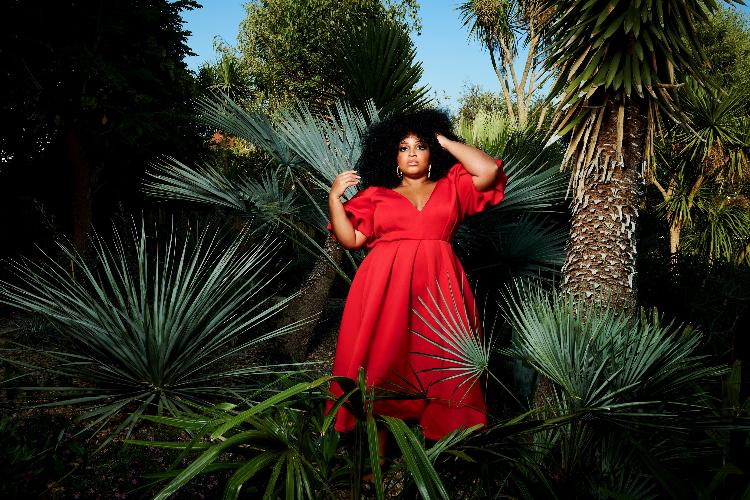 A lot has happened since West End and Broadway star Marisha Wallace was last on tour… In fact, her debut UK tour was cut short by the Covid-19 pandemic.

But that’s not held Marisha back – with the past year seeing the vocal sensation signed to Decca Records, releasing her debut album Tomorrow, wowing new audiences with performances on Strictly Come Dancing, the Festival of Remembrance and the Royal Variety Performance. She finally returned to the West End stage in the spring in the musical Hairspray, as Motormouth Maybelle, where she’s been winning nightly standing ovations for her outstanding performances.

From growing up on a farm in North Carolina, Marisha Wallace has gone on to Broadway and the West End, starring in huge hit musicals including Dreamgirls, Waitress, Aladdin and The Book of Mormon.

One of the most recognisable voices of a generation, Marisha’s latest tour will start at King’s Hall, Ilkley on September 24. Marisha will then play London’s Arts Theatre (Sept 27), Aberystwyth Arts Centre (Sept 30), the Royal Welsh College of Music and Drama in Cardiff (Oct 1), Birmingham Hippodrome (Oct 2), Southampton Mayflower (Oct 3) and finally Lowther Pavilion in Lytham (Oct 6).

The tour promises a mix of tracks from the album, as well as songs from her summer EP release Soul Of The Stage, all delivered with that classic, unmistakable Marisha style. Tickets are on sale here.

COVID-19 has had a huge impact on performers, in so many ways – your debut tour was cut short, and shortly after you contracted COVID yourself. How was that experience?

It was such a scary time. So much was unknown about the virus and what it does to you. So getting it was scary. I was sick, unemployed and stuck in the house, and my family was thousands of miles away in America. I felt very hopeless. Then I bought a mic and just started singing and recording music in my house. And that is where Tomorrow was born. To now be touring the album of Tomorrow after all that is just incredible. The sun really did come out, as the song says.

In among all that happening, you signed a record deal, released your debut album Tomorrow – with the title song something of an anthem of hope, and supported fundraising efforts for the theatre industry. That must have bought about mixed emotions… a big personal success at a time when the industry you love was in crisis.

I never thought that Tomorrow was going to do what it did. It went to number two on the iTunes charts next to Beyoncé. I got a record deal, I sang it for the Queen during the Royal Variety and then the 2020 US OPEN used it in the highlight coverage. We raised £10,000 for the charities. It was just mind-boggling.

It was such a Catch 22, having all your dreams come true while others were having the worst time of their lives. But I used my music to help people through those dark times. In some ways, I was a beacon of hope and that song and that album made people believe again. Believe that things would get better and that trouble doesn’t last always.

Hairspray was one of the first shows to reopen in the West End. How was that opening night? What’s it been like being back in front of a live audience?

The whole experience of Hairspray is something I don’t think I will ever forget. To be a part of one of the first big shows back is such an honour. To see thousands of smiling, crying, laughing faces enjoying life again makes it all worth it for me.

I get to sing the 11 o’clock number “I Know Where I’ve Been” which is a protest song in the show. To be singing it now, after all we have been through with George Floyd’s death and the Black Lives Matter movement, on top of the pandemic… It just has a whole new meaning. I am getting standing ovations every night after the song. I am in tears at the end because I know how much this means to my ancestors, to my family and to my people and to me.  This is when theatre transcends the stage and moves into a cultural reset.

Now you’re preparing to hit the road again, with your latest UK tour. How excited are you for these shows?

I am so excited!!! I can’t wait to see my fans again. We went through so much together during lockdown. I was entertaining people through Instagram, with my Sing With Marisha concerts and bringing singers on to my platform – and now we all get to sing and dance together live in person. I am so happy.

I know these concerts may be some people’s first time out so I want to make them really special. And boy do I have a story to tell. We are going to have the best time.

It feels like you’ve become an adopted Brit now, you’ve been in the UK a long time. What do you love about the country and have you had much chance to explore?

I love it in the UK. I have been here almost five years – I can’t believe it. It has been a fairy tale journey. What I love is how much you all have embraced me just the way that I am. I haven’t had to change or be someone else. You love what I do. I love that this country really loves the arts and it is a family tradition to see shows and it is passed down.

I am a huge explorer too. I have been to so many places in the UK. I absolutely love all the seaside towns and getting the banging seafood. But then I love the fierce city life too, with all the history and amazing restaurants.

What can audiences expect on the tour?

They can expect a night of inspiration, dancing, and full-on belting.

My shows are more like an experience. You won’t leave the way you came in. I will be singing all the big songs you know me for – “And I Am Telling You I’m Not Going”, “I Know Where I’ve Been” – and songs from my album Tomorrow and from my new EP Soul Of The Stage. I will be doing tributes to my fave singers like Whitney and maybe some Tina Turner too.

I have so many stories to tell too. We are just going to celebrate life and getting back to it.

Who will be joining you on stage?

That’s a surprise! You have to get a ticket to find out…

We’re so used to seeing you as these fantastic characters – Effie White in Dreamgirls, Motormouth in Hairspray, Necky in Waitress, What’s it like stepping out as you, as Marisha, with just a small band instead of a full cast behind you?

Being me on stage is my favourite role to play. I get to be completely vulnerable and just have a full connection with my audience. This is where I thrive. I started out in the cabarets in NYC and now I have taken it to the big stage. This feels like coming home.

Tell us how you came to be starring in such big shows in the West End. Where did it all begin? What was your journey?

Well, I became a West End star by accident. I had worked on Broadway for about five years and was doing a show called Something Rotten, playing a tap-dancing egg called Eggie White. True story.

Then I got a call from my agent asking if I wanted to play Effie White in Dreamgirls in the West End. I had to pack all my stuff in two days and got on a plane to London. The lead had gotten sick and I was called to replace her for three weeks. Three weeks turned into two years with me taking over the role of Effie, which started a successful career here in London.

It was something I had always wanted in New York, on Broadway, and it turns out that London and the West End was where I was supposed to be all along.

In Dreamgirls, you sand the incredible iconic anthem “And I Am Telling You”. Now, in Hairspray you’re getting nightly standing ovations performing “I Know Where I’ve Been”. How does it feel when you sing these huge, powerful, impactful numbers?

It is an honour and also scary to sing these huge numbers every night. You want to give the people everything they want and live up to the hype. I take pride in going there emotionally every night and giving each audience the full experience.

To sing “I Know Where I’ve Been” now is just incredible. It feels like legacy work, something I have to do for the culture. We haven’t collectively mourned the racial injustice in our society because we were separated in lockdown. But to be in the room together hearing that song and feeling all those emotions is something else. The chills and the tears are there every single night.

You’ve played some iconic roles and made them your own. What’s your dream role?

My dream role is to do an original role. One I can create from scratch that no one has heard of that I create that leaves a legacy for other women like me to play; a curvy, black woman who is multi-dimensional, a woman who has wants, needs, love interests. A well-rounded character and not just the random black girl singing the soul.

And what’s next after the tour?

After my UK tour I’m doing my first US tour, which is so exciting. More music is coming and hopefully more film and television. I’m just going to keep climbing that ladder rung by rung.

Do you have a message ahead of the opening night of your tour?

My message is to grab a friend or family member, get a ticket and get ready for a night to remember. It is time to feel alive again; to dance, to sing and to enjoy. We have been through so much and Tomorrow is finally here.