Medea Electronica will be at the Pleasance Theatre 19-24 February 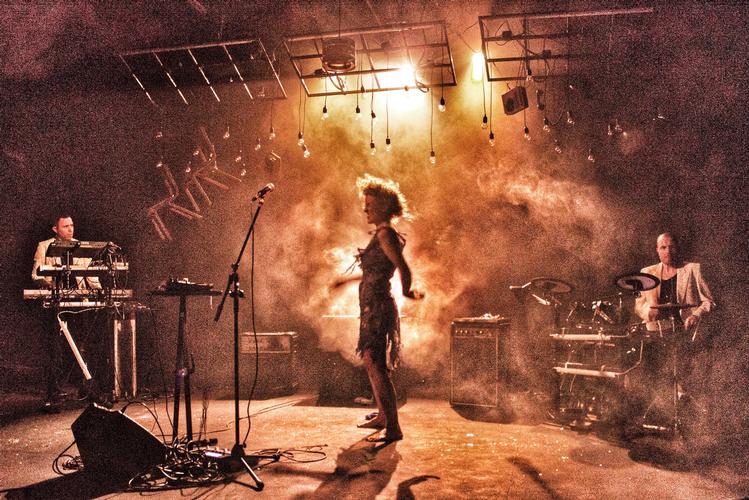 Kicking off an international tour, Edinburgh Fringe smash-hit Medea Electronica brings its unique and primal energy to Pleasance Islington this February. The genre-defying Pecho Mama reinvigorate Euripides’ intense drama by placing it in the maelstrom of a live synth gig with an all original soundtrack.

We had a chat with the creator and performer Mella Faye.

Hi Mella. How would you describe your Medea Electronica?

In our adaptation - as opposed to that of Euripides - Medea doesn’t seem Godly, instead she seems completely relatable, especially to any mother. The domestic scenes are achingly naturalistic. The marriage breakdown scenes are instantly recognisable. But the songs and lighting shifts add the godliness. We switch from mundane household chat to searing prog-rock and electronica.

The musicians are constantly creating a soundscape around and in response to the dialogue. It’s like a live concept album. The theatre show convention is flipped. The actors are pre-recorded and the musicians are live.

Why did you want to revisit specifically this Greek tragedy, and set it in Thatcher’s Britain?

Medea is a fantastic story that has stood the test of time. It’s one of the greatest roles for women to play: she is hero and anti-hero, quivering with rage, passion and has all the agency of any great mythical male character.

But it's too easy to demonise Medea. So often we see women, especially women with a history of mental health issues, getting the blame or painted as monsters. I wanted to see if I could bring the audience onto Medea's side, despite her devastating actions.

The setting of Thatcher’s Britain allows for the dichotomy of the mundane and the dramatic, marries with the musical styles and provides echoes of the political unrest of today’s world.

Why do you think the story of Medea and electronic music blend well together?

Electronic music enables us to create the building cacophony of Medea's exterior and interior worlds; the critical voices, her increasing desperation and rising anger combined with the tenderness towards her children.  We get to layer, distort and stretch sounds to demonstrate the complexity of her story. The music is both beautiful and harsh. We want the audience both on edge and empathetic. Electronic music brings all these contradictions to life.

Medea’s rural world revolving around her children and a pulsing prog-rock-electronica gig seem at odds until they bleed into each other as Medea smashes her way out of her domestic cocoon.

What was the main challenge in preparing this show?

The hardest part of creating a show for me is the very beginning - moving from a vague idea into a story. It always feels like swimming through treacle!

Is gig theatre here to stay, in your opinion?

As long as there are people passionate about live, original music and gripping theatre then yes, why not?! Gig theatre works for Pecho Mama because it gives us more space to play as both musicians and performers. But more important than the medium is the stories that we're telling and the challenging topics we're trying to take on with a sensitivity and lightness that enables the audience to fully enter in.

What is Pecho Mama working on next?

Divine Intervention is our new show. It's gig-theatre too; based on the story of Persephone and set in the underworld of Berlin. We'll be sharing our first work-in-progress performances at Ovalhouse on 20-22 March.