From Dublin to London, we chatted about Violet, Wicked and, of course, musicals 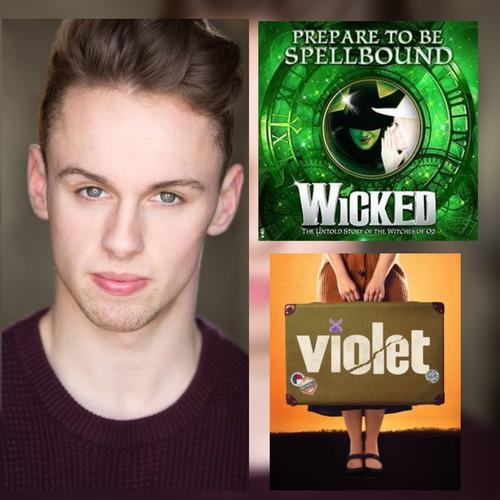 - Hi Danny. Nice to have you on LTR. Can you tell something about you?

I grew up in Dublin as the youngest of 8 siblings in a town called Howth by the sea. I took part in a load of local pantomimes and musicals from the time I was about 7 years old. I fell in love with performing and after a few years of staying local I went to the Gaeity School of Acting on a part time musical theatre course during my teens - and subsequently ended up being a part of a few bigger shows under an amateur association that we call AIMS (The Association of Irish Musical Societies). This is when I really decided I wanted to do this as a career. At 18 I went in to a music degree focusing on opera and after a year made a decision that my heart wasn't really in it and started applying to drama schools in London. Four years later here I am!!!

- You will be in Violet, opening in January at the Charing Cross Theatre. Can you tell us more about this production and the cast?

It's going to be a super exciting production that's a Charing Cross Production in partnership with Umeda Arts Theatre in Tokyo. We're working with a Japanese director called Shuntaro Fujita who has got a very clear concept of what he wants and communicates his vision to us via an interpreter. The theatre itself is being transformed quite drastically for Violet which I'm super excited about (and excited to see how everyone reacts to it). The cast are amazing and the collective sound of the ensemble numbers is really something special. Kaisa Hammarlund is leading the cast as Violet. She is such a wonderful actress and it's inspiring to watch her process in the rehearsal room - I'm learning so much from her!

- What are your memories of Wicked? Why do you think it is such a popular musical?

I've got so many brilliant memories from being a part of this show that I'll have with me forever. Opening night was a super special memory in that massive auditorium. The way the audience react to the show is so exciting and it gave me such a rush of adrenaline every night. I'll always remember the first time I played Boq too (the role I understudied) - it was a role I had wanted to play ever since I wanted to be an actor and it was a pretty surreal experience the first time I got to go on! It's such a popular musical because it's such a massive spectacle. The show for me has always been a favourite for so many reasons: the music, the costumes, the set, the special effects and mostly the story. It speaks such a beautiful message about loyalty, friendship and acceptance that can be connected to universally. I hope it never closes!

- The new year is going to be a feast for musical's lovers, with many new shows opening. Many of them will transfer from Broadway. Do you think there is enough space for British theatre in our scene?

I'm so looking forward to all the great shows that are due to open next year. I think there could always be more space for home grown writing - having said that, some of the shows that are coming over are ones I saw in New York and I completely think they are shows that have a home over here. How about some new Irish theatre too!!!?

I recently saw Wise Children at the Old Vic and thought it was great! I loved the quirky atmosphere the production brought to life and I thought the story was impeccable told with no stone being left unturned! I loved that the casting didn't have any limitations on gender or race too - it completely added to the story and the way that it was being told. Shoutout to Omari Douglas - he gave such an amazing performance!

Thank you Dan and good luck for Violet, that runs 14 Jan – 6 April at Charing Cross Theatre.