People who are passionate about their work are my definition of happiness. And David is one of them. We had an interesting conversation about theatre, Bodyguard and Beautiful, about being an actor, politics and much more. Here some of the things we talked about. 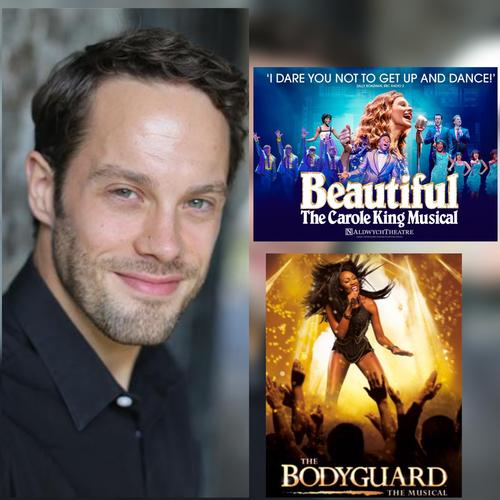 My background is mainly in theatre and I definitely see myself as 'an actor who can sing'. I'm blessed with a large acting and vocal range. I love doing comedy; I also love Shakespeare and plays by Arthur Miller, David Mamet and many others; I have a love of cinema and am a bit of a Star Wars geek. I always knew I wanted to act and always sang but it wasn't until studying at Brunel University that I really opened my mind to musicals. I then went on to The Royal Central School of Speech and Drama to get my Masters; I then cut my teeth being involved in plays at the Almeida theatre; Edinburgh Fringe; Brighton Festival; and lots of venues around London.

My range means I am lucky in the roles I can play - in Beautiful - The Carole King Musical I play all the white guy roles: The low Righteous Brother Bill Medley to the high Righteous Brother Bobby Hatfield - a bass to a top tenor! I also play the mentally tumultuous Gerry Goffin; the wise cracking, rock singing Barry Mann; the commanding New York record producer Donnie Kirschner - a broad range of acting demands as well. Before Beautiful I was in the West End production of The Bodyguard with Beverley Knight, Tristan Gemmill and then Alexandra Burke. Before that I was hugely lucky to tour the USA with an arena show called Batman Live starring Outlander's Sam Heughan. This was an incredible job - what kid doesn't want to play comic book characters in front of thousands of people?! I've also worked on screen and am in the process of writing and shooting a couple of short films. I love the shift in challenges between stage and screen - the storytelling is still the same.

My current role has been brilliant. Beautiful is a fabulous show with five roles that I love playing for individual reasons. I started with it in the West End and then went on tour. I love playing all three of the leads and am lucky enough to have had plenty of experience going on for each of them. It's a lovely story with a razor sharp script and the original direction by Marc Bruni is just a pleasure to play. Although Carole is the main focus of the piece the role of her husband Gerry is probably the best to get my acting teeth into - he was a genius lyricist with some internal demons that take their married life in lots of different directions. My other favourite role is that of their best friend Barry Mann - he's a wise cracking, cheeky music writer who falls for Cynthia Weil. Barry gets some absolutely beautiful and fierce songs to sing - 'Walking in the rain' and 'Gotta get out of this place' are my stand-out favourites.

The show is coming to an end in June and I'm hoping to move on to the next adventure. If I could choose I'd love to do more regular screen work or a great piece of new writing. For me, performing is such a way of life that I love it in all its forms. I have loved being an onstage and offstage understudy: they both have their pros. I take pride in being trusted to cover so many roles and I know that I am valued for my flexibility and the trust producers can give me. I've also loved playing leads - I don't see a massive disconnect between playing a lead or playing a member of the ensemble - both roles have different pressures and constraints but when everyone pulls in the same direction it's magical. I'd love to see more rep theatre in the UK and more openness with employment rights and conditions. Wages in the UK across all industries have stagnated yet GDP is up and there seems to be no plateau to the cost of living or house prices. It is something that Equity are trying to improve but the issue will only move forward if SOLT members agree and compromise. There has been a surge in interest in the Broadway/West End comparison with articles about the billions of pounds that are spend on theatre every year meaning there doesn't seem to be any shortage of money coming into the industry. Producers and management companies aren't crooks - they have bills to pay and shareholders to divide profit between. I've worked in the States and the balance seems to be more level over there. Performers can give notice on a role like any job in other industries (this has pros and cons for everyone) and wages are much more (with the extra US taxes to pay). Broadway performers are given a huge amount of respect by other areas of the performing arts. I'd love to see our industry learn from them and improve the wages and conditions of West End performers... and realise that actors who can sing or dance can also act, and act well.