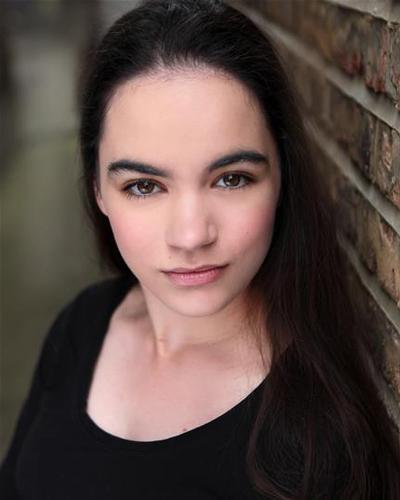 Hi Kheira. You are in the cast of the play Voices from the Deep, opening at King’s Head Theatre soon. Can you tell us more about this play and your character?

It’s night (7th May) of four short plays melded together by Shakespearean verse, from Paperclip Theatre at the King’s Head Theatre. The night is all female, down to the playwrights, directors, actors (me!) and stage managers. Our protagonists allow us to embrace female stories and highlight inequality around the world.

I play Suad and she’s a half Algerian, half French young woman. We’re never really sure if the ball is in her court, or if there’s even a court for her to play on. It seems like she is the game herself, as she’s the one being pushed and pulled around by others.

‘Voices from the Deep’ asks the question – who really runs the world?

I’m a young-in-career actor and every week is very different. For example, on Sunday I spent the morning trying not to harm my lungs in a horror film, before running a flirtacious 1920s Charleston sequence at an afternoon audition, before giving my heart, spirit and soul to a monologue about repressing my sexual identity. It’s liberating finding the truthfulness in everything I’m faced with.

A highlight has been a rehearsed reading we recently performed at the Arcola Theatre called ‘Global Female Voices’. I played Raya in Nina Kossman’s ‘Foreign Gifts’, a very stubborn seven year old and I don’t think I’ve since recovered from greeting the audience as ‘Foreigners’ and ‘Communists’.

I’ve actually been in more theatre than I’ve seen recently, so I’m slacking in what’s great in London at the moment. Although the pieces that I have enjoyed in the last few months include: ‘Hamlet’ at the Hackney Empire and indeed Robert Icke’s version, which was shown on the BBC the other night. Carey Mulligan in ‘Boys & Girls’ at the Royal Court was an experience which all should delight in. The way she beautifully handles herself, her thought changes; I was definitely in awe!

When I participated in the Creative/Destruction Festival at the Arcola Theatre I got to see so many pieces of theatre which really wanted me to run for prime minister, because the world is really very bleak indeed.

The kind of theatre I like has to really grab me: hook, line and sinker. It’s got to make me want to jump for joy when the protagonist beats their obstacle or cry when the odds are against them. Something that I can’t predict or changes my expectations. This is why I’m really excited to see the premiere of Mike Bartlett’s ‘Not Talking’ at the Arcola. I’m a bit of a sucker for his dry outlook on reality.