Let's talk with this very talented actor about Moonfleece and theatre 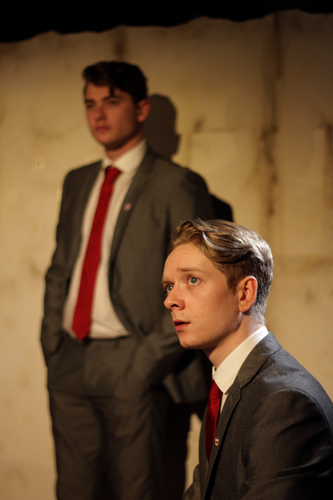 I’m 24 years old, Hampshire born & bred. I graduated from LAMDA a few years ago and became a part of Lidless Theatre towards the end of last year. My first show with the company was 'Long Arms' which was a devised piece focusing on the LGBT crisis in Chechnya

You are in the cast of  the play Moonfleece, currently at the Pleasance theatre. Can you tell us more about this play?

The play follows Curtis, a leading figure of a far right political party, who is being haunted by his dead brothers ghost. With the election only days away, he agrees to hold a seance in the flat he grew up in. The play explores issues of far right extremism in this country and sheds a light on where this kind of hatred is rooted from. Curtis must confront his past in order to get the answers he needs, but by doing so, has to come to terms with the person he used to be and the person he’s become

There isn't a particular genre I gravitate to more than others. Anything that makes me feel and think at the end of the day. I've always had a preference for intimate spaces though, there’s nothing quite like the feeling of claustrophobia in the theatre. The last show I saw was Angry at the Southwark Playhouse which I thought was a brilliant production with stellar performances

Nothing on the cards right now besides from a sunny trip to Barcelona. After that... god only knows. Hopefully some more gritty theatre

Don’t miss Moonflece at The Pleasance Theatre, with James’ beautiful and touching performance.