We fired our 20 questions at Bianca 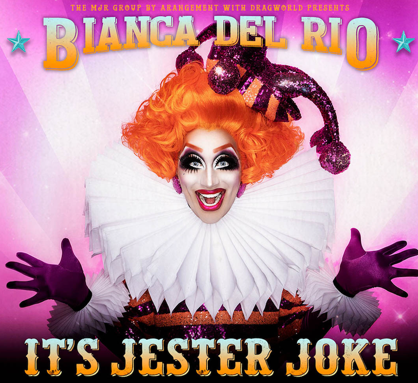 We fired our 20 questions at Bianca. You cannot hear our laughs. But definitely you can read her answers.

What the audience should expect from “It’s Jester Joke UK Arena Tour”?

Anything that is available. When you are travelling you don’t have many options.

You have recently been in Everybody's Talking About Jamie. Is there another musical you would like to be in?

Los Angeles, my home, cause I haven’t been there for a long time

Not the traffic. It would be the people, the people of London are lovely!

Did I mention the traffic?

Something naughty that a fan told you..

Oh…oh…ohhh.. people are not usually naughty with me, they are very scared. I usually get a “hello” and a hug.

I have people I have grown up with and I love the music like Madonna and Cher but also Shirley Basset, Liza Minnelli..you know, the typical gay icons

Are you a jealous person?

Not at all. I wish I cared.

How many languages do you speak?

What is your favourite city to live in?

I love New York, I have lived in NY for 15 years and I would definitely live there again. It is just hard to travel, to get in and out of the city, and that is the reason why I am in Los Angeles now. But I am looking to buy a house in Palm Springs, California. There is nice weather and everyone there is old, so I am gonna look young.

What is your favourite TV show?

I guess I am supposed to say RuPaul's Drag Race (laughing), but I would say my favourite show is Golden Girls. I have watched every episode and I watch it all the time.

How much time do you spend on social media every day?

It varies. If I am travelling, I would probably spend more time because I am trapped in a vehicle or on a plane. I usually post something in the morning and something in the evening. It is an easy way to check what is going on.

Are you afraid of something?

I am afraid of being normal.

Brexit yes or Brexit no?

Oh, no, I am the last person who should talk about Brexit. I have my own problems: Donald Trump.

How much time do you spend on your skincare?

More time than I want. After a show, I would say roughly one hour.

How many UK cities will be touched by your tour?

I have no idea. I haven’t counted. I am afraid to count them all.

Does your job make you happy?

I think so. I am getting to do everything I’ve always wanted to do. I love it and I am grateful I can do it in such a large scale.

And if I am not happy, I just drink.

And we drink to these answers and to the tour. ‘It’s Jester Joke’ Tour will travel the length and breadth of the country bringing her irreverent, side-splitting comedy to 13 cities including dates at SSE Wembley Arena, Arena Birmingham, Motorpoint Cardiff Arena and more in what will be the biggest ever solo drag show in the UK.