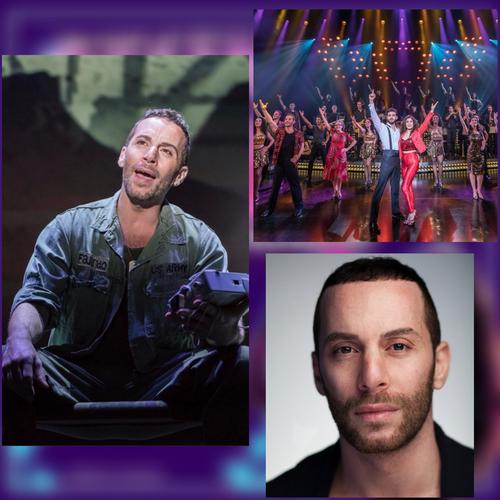 Hi Elia. When did you decide to be an actor? Has it always been your passion?

I remember that since I was a little boy I used to perform in front of my parents and friends during our family gatherings. I would improvise a show, putting my grandfather's big hat and shirt around me and I would act, sing and dance. I have always found in theatre and drama the perfect way to channel my creativity and exuberance and also my emotions. I used to watch "Fame" the TV series and pretend to be one of them, act like them. My Mum knew since I was a child that I was made for the  Stage. My family constantly supported and fed my talent and passion for the performing arts, sending me to drama school and to singing, piano and dancing classes. My mother also sent me to our local church's theatre company to start getting some experience, helping with the backstage duties. I used to love seeing those big theatre curtains and red velvet seats and staring at the actors whilst rehearsing... It was then that I decided I wanted to be one of them, one day.

You play Jose’ Fajardo in “On your feet”, Gloria Estefan’s musical, currently at the London Coliseum, and then on tour across the country. How is it going? Can you tell us more about the show?

The show is great and the audiences are loving it, they are very attentive and follow with much interest and get taken on an emotional journey of Gloria’s life. The show presents the life, career and love story of Emilio and Gloria Estefan, from their early days in Cuba until when they reach stardom. I play Gloria's ex-military damaged father, José Fajardo. He was a police officer for the Battista's regime. During the Cuban revolution, the Fajardo family had to leave Cuba to find a safer life in Miami. Once in America José volunteered for the Vietnam War where he got in contact with the "Agent Orange" that caused Multiple Sclerosis which left him in a wheelchair, he was nursed by his wife and daughter Gloria. My character brings a bit of drama to the show and some emotional moments, but we also have some very funny moments throughout the show with Karen Mann as Cosuelo and lots of great dance numbers, a highlight is "Mi Tierra“ where we have a sensational Madalena Alberto as Gloria Fajardo. The whole show is a real roller-coaster of emotions, it talks about respect, equality, love, diversity, inclusion, family and tradition. People connect and often identify with those amazing topics in Gloria's life. The message is a universal message very delicate and ever so present nowadays in the whole world, let's just think about Trump's America or the Brexit. I can proudly say that our Show is a new Hit in the West End.

Gloria Estefan is an incredible artist. Was she involved in creating the West End show? Did you know her songs, before working on this show?

Let’s start by saying that I am a big fan of Gloria Estefan, I grow up listening to her music. When I got offered the part of José I was thrilled, I was beyond myself with excitement that I would be singing some of Gloria’s songs. Gloria Estefan is not only a worldwide pop star but also an amazing human being. She worked so closely with us during the rehearsals process. She talked to me about her family, her mother and her grandmother. Showed me pictures and voice recordings of her father that he used to send to her while in Vietnam. I shared laughter and tears with her. She made sure we all would deliver the true story and I must say that I am so honoured to portray her father on stage every night.

You have lived in London for many years. What do you think about the West End? Is the theatre world experiencing some uncertainty related to the political news about Brexit?

The West End has given me many years of work opportunities and experience. I moved to UK in 2003 and in 2004 I had my West End Debut in The Lion King, Disney. I have always considered  London a multicultural place to live and work. Every show in the West End includes so much talent that comes from all over the world. All of this makes the West End shows unique and original. For instance, On Your Feet, it has ten different nationalities on stage and each one of them brings their own talent and identity. With Brexit it will be more difficult to access to the full scope of European talent than it was in the past, due to restrictions and visa and many other things that may be introduced. Let’s not forget also about the EU funds that help the entertainment industry. I can already see that new productions are not investing anymore in long term running shows but in the uncertainty of what will happen, they just prefer short runs as they don't want to take risks. Yes, I can definitely see and feel concerns around the industry about what will happen and how that will affect our future work and the theatre quality.

Is there any artist who has influenced you?

At first I'd like to mention the amazing  Gianni Salvo, Sicilian Actor and Director of the "Piccolo“ Theatre in Catania. He was my first drama teacher and made me fall in love with Acting. Carl Anderson, the original Judas from the Jesus Christ Super Star 70's movie, who helped me gain confidence on stage at the beginning of my career.  Mrs Thea Nerissa Barnes from the Lion King London, who took me under her wings and taught me how to fly high with pride. Gloria Estefan whose music accompanied and touched many moments of my life till today.

What advice would you give to someone who wants to be an actor?

Never stop studying and learning from those more experienced than you. It is vital for an actor(ress) to constantly nurture and develop their craft. Never stop believing in your dreams whether they are big or small. If you want something you can get it, work hard and you will be rewarded.

No as yet as I have been so busy with my show at night, but I have already booked my tickets to go and see“ The Prince of Egypt “ which will soon open at Dominium Theatre it has a stellar cast one of which is Alexia Khadime who was  Nala in my Lion King Cast.

You can find tickets for On your feet from £ 23: here