AJ Bentley is ready to take us to Skopelos, Greece. Get your ticket ready. 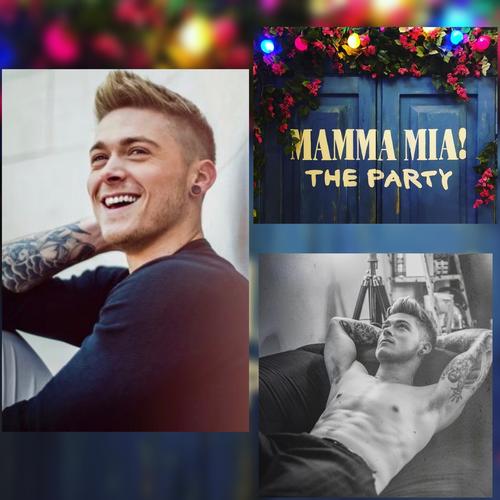 Hi AJ! MAMMA MIA! The Party will open in September, with previews from 29 August. What is it about and who will you play in the show?

MAMMA MIA! The Party is an immersive theatrical dining experience set on the island of Skopelos, the same island the MAMMA MIA! movies are set. I play a character called Adam. The story follows an action-packed evening in ‘Nikos Taverna’ - run by Nikos and his wife Kate, with Nikos’ mother (Grandma) overlooking the action from her balcony.

Nikos’ daughter Konstantina and Kate’s nephew Adam, (who both work in the restaurant) have fallen for each other - much to the dismay of Nikos and Grandma who think Adam is just trouble. During your evening you will enjoy a three-course Greek meal, a three-act show written by the amazing Sandi Toksvig featuring the music of ABBA, and an ABBA disco at the end.

As the evening goes on, tensions rise and the story evolves whilst everyone frantically attempts to keep the restaurant running smoothly for the guests. The show happens around you. You’re not just coming to see this show, you are IN this show, and that’s what adds to the magic.

Sounds like a lot of fun! Are you an ABBA fan? Do you have a favourite song?

I am an ABBA fan! Their music has always been a part of my life - kind of without me even really knowing it, I’ve just been brought up on ABBA music. I love both of the movies and the West End show is great fun!

Picking a favourite is tough. When I Kissed the Teacher, Angel Eyes, Does Your Mother Know, Voulez Vous - the list could go ‘on and on and on’ (ABBA fans will enjoy that pun).

MAMMA MIA! is bigger than ever, with two of the most successful movie musicals in history, a musical in the West End in its 21st year and now MAMMA MIA! The Party. Why do you think it is so popular?

I think it’s so popular because Benny and Björn, being the genius’ that they are, have managed to deliver hit after hit. I was speaking to Björn about this the other day, ABBA songs are a pop/theatre fusion. They have both pop and theatrical influences that just move people in every way possible. ABBA music is timeless and that’s why, all of these years on, show and films are still being made.

You have recently been in The Band, Tim Firth and Gary Barlow’s musical. How was the experience and how was performing in the West End?

It was an amazing experience. Coming out of the TV show, into rehearsals and then all of the tour and West End, it was nearly 3 years of my life! I've learnt so much, experienced more than I could’ve imagined and met and worked with some of my heroes. I also made my West End debut on my 24th birthday which was the icing on the cake.

Have you ever been to a Greek Island?

I have! I’ve been to Crete, Rhodes and Faliraki. CALISPERA!

Calispera AJ! See you at the tavern.  Tickets: here