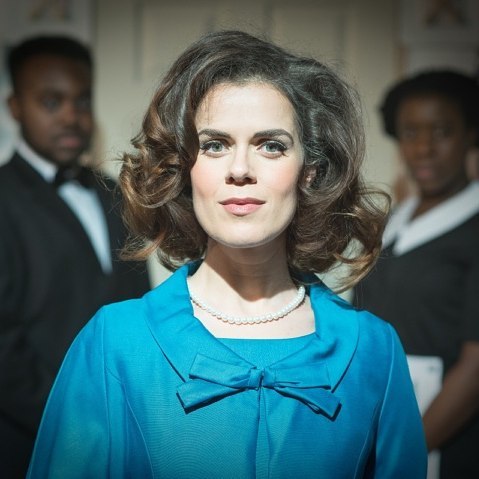 You have probably read my review of the musical “Hot lips and cold war” currently at The London Theatre Workshop (if you haven’t, check it).

Marcia gives a great performance as Jackie Kennedy, expressing perfectly her strength but also her vulnerability. Let’s talk to Marcia and get to know more about her and the musical.

Can you tell us a bit more about you and your work?

I've returned to the stage at the end of last year, after a brief 3-year hiatus, during which time I continued to perform vocally with vintage trio The Victory Sisters. It feels fantastic to be back exploring character roles again, and performing in such an interesting new piece of theatre. Since graduating from Mount view I have performed in some great roles in London, favourites of which include Claire in Ordinary Days and Luisa in Nine.

How is your experience in “Hot lips and cold war” going?

It has been the most intense and rewarding theatrical endeavour of my career thus far! London Theatre Workshop champions new works, and to be part of that process is challenging and exciting in equal measure. It has definitely meant that we have, as a cast, bonded very quickly and strongly, which I think translates well on stage given that we are representing a household that has lived together for many years.

It is exciting to play the part of Jackie? What do you think about her character?

It is exciting, but also rather daunting - to try to portray such an iconic character without creating a caricature is no mean feat. We were very fortunate that our lovely director Tim McArthur encouraged us all to find the truth in our characters, and by doing so I hope I really bring out the human elements of her. Jackie was an extraordinary woman, as a First Lady, and afterwards. She brought style, humanity and grace to the White House, she was multilingual, and curious about cultures outside her own, and was incredibly dignified in the face of multiple adversities. I do hope I have embodied a little of all this in my portrayal of her.

I am continuing to entertain the masses with my lovely vocal groups The Victory Sisters and the new London branch of The Satin Dollz this year, with appearances at vintage fairs and events across the country. As far as further acting appearances on the stage, who knows?!