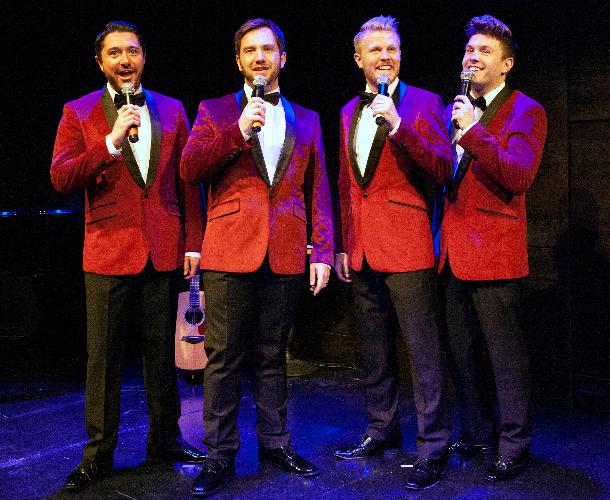 In the musical theatre world, is there a greater stamp of quality than having the incredible, epic musical Les Misérables on a performer’s CV?

That’s the question The Barricade Boys aim to answer with a resounding “YES” as they head out on the road this year, with dates in Cardiff, Wolverhampton, Manchester, Bradford, Sheffield, Ipswich, Basingstoke, Bath and Chepstow.

Starring past performers from the global theatrical sensation that is Les Misérables, The Barricade Boys have entertained fans around the world since they formed in 2015.

The Bring Him Home Tour will feature music from some of the best-loved shows from the West End and Broadway stage, including Phantom Of The Opera, Miss Saigon, Jersey Boys and, of course, Les Misérables, as well as hits from some of pop and rock music’s all-time greats including Queen, Elton John, and The Beatles.

Founding members Scott Garnham and Simon Schofield took a break from rehearsals to tell us more about the theatrical supergroup and how they’re preparing for the tour.

“Simon and I have been best friends for a long time,” Scott said. “We met working in Venice, then again in South Africa, and had so many similar experiences of working in musicals, that we started having ideas of doing something together.

“We eventually came to this one, drawing on our experience of having spent time in Les Mis – and as anyone who has been in Les Mis knows, especially the men, you spend a lot of time on those barricades, which gave us the name.”

Joined by Kieran Brown – a former Phantom in The Phantom Of The Opera, and Craig Mather, who has 1,000-plus performances as Marius in Les Mis, to his name, Scott and Simon booked a one-night show at London’s Charing Cross Theatre, which quickly sold out and saw the launch of The Barricade Boys.

“That concert went down unbelievably well, it was electric,” Simon added. “It set off this journey and it hasn’t stopped since. We just keep getting bigger and better – and we are so excited to be working with Live Nation and Cuffe and Taylor on this tour.”

Scott, Simon, Kieran and Craig form The Barricade Boys’ ‘A-team’ of original members, but the group’s roster includes around 50 additional performers who join the show for various events and performances.

Such is the pulling power of Scott and Simon’s phone book, they brought together the likes of Les Mis mega stars Alfie Boe, Ramin Karimloo, John Owen Jones and more, to record a lockdown version of the iconic Les Mis track Bring Him Home in 2020.

“Any performer who has been part of Les Mis has an automatic stamp of quality attached to them, and we’re so lucky to be able to draw from that talent pool, to share that talent with audiences across the country.

“And that means there’s a real recognition of quality when people see the name The Barricade Boys, and that’s amazing for us to have created it.”

While Kieran, Scott, Craig and Simon have the shared Les Mis experience, they have also performed in huge West End hits Mamma Mia, Wicked, Billy Elliot, Heathers, The Sound Of Music and Joseph And The Amazing Technicolor Dreamcoat.

So what can musical theatre fans expect from the Bring Him Home Tour?

Simon said: “We’ve been working on the set list, and there is a big hitter from every West End show you would expect, all the classics from Jersey Boys, Miss Saigon, Les Mis – of course. You name it, it’s in there, but we can’t wait to also share our take on tracks from music legends such as The Beatles, Jerry Lee Lewis, Elton John and a fantastic tribute to the stars of Motown.”

“We are working on new arrangements of some new musical songs too, and without sounding too much of a cliché, it will appeal to everyone from children to grandparents,” Scott added.

“When we started out, there were other groups doing a similar thing, but centred round the ballads. We wanted to do something different, and to break the expectations.

“So we’ve always built our set lists around a lot of different genres, brought in more choreography, switched it up. For this tour, we’re working with Liam Steel who was the choreographer for the Les Mis movie, which is incredible, and a seven-piece band and some amazing tech lined up.

“After a couple of years of uncertainty, to now be out with a fresh new tour, bigger venues – it’s an amazing feeling to get back to it again, and we cannot wait to see the audiences, to entertain people and to have a great time on stage.”

For more information and to purchase tickets go to www.cuffeandtaylor.com