A few questions to Elesha Paul Moses, coming to London with Whitney- Queen of the Night 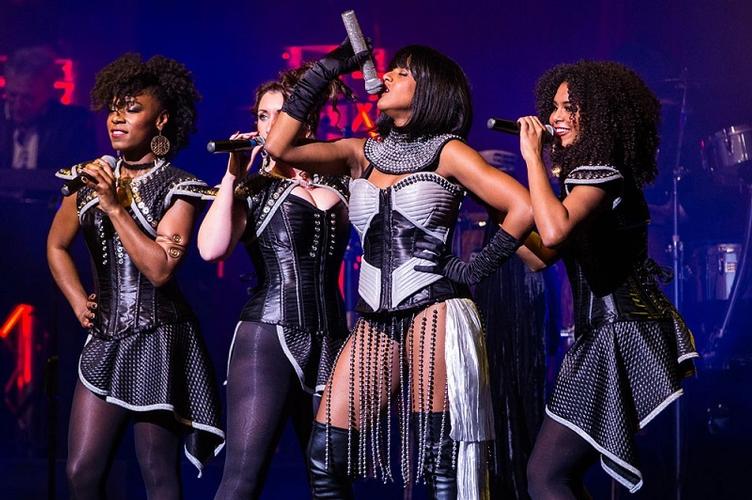 Elesha Paul Moses has paid her dues in the entertainment world; she’s been striving for success in the music business for 20 years, via traditional grafting and TV talent shows.

And now, she’s set for a fresh start, taking her singing career to a new level starring in the critically acclaimed international stage sensation Whitney: Queen Of The Night for its sold-out West End premiere at The Savoy Theatre on Sunday, March 24 with shows also on Sunday, June 2 and Sunday, July 7.

Elesha, 38, who comes from Hampshire, appeared on The X Factor in 2010, alongside One Direction, winner Matt Cardle and in the same category as the big-haired, bongo playing wild card contestant Wagner. She then reached the battle rounds – twice – on The Voice, working with will.i.am in a duo in 2013 and Tom Jones as a solo act a year later. She had previously been mentored by Mathew Knowles – Beyonce’s dad – on a Channel 4 talent show.

In recent months she’s been touring the UK and Europe as the understudy and lead Whitney Houston in Whitney: Queen Of The Night – as she now prepares to step into the limelight full time. In 2019 she is also touring the UK as Tina Turner in the brand-new mammoth theatre show What’s Love Got To Do With It?.

Elesha, how did you get into singing and performing as a tribute artist?

When I first started singing – well, when I first realised I could properly sing I was about 13 – I was always mimicking others and that’s how I taught myself. But that real big belting voice wouldn’t necessarily come out. Then, listening to people like Whitney Houston and Mariah Carey, those kind of artists, was when it really came to me.

I was singing in a club and a friend said ‘We should do something different’, I said ‘Shall we try Whitney or something?’. I went home, put down a couple of lines of Whitney and thought ‘Oh, I can sound like her’. It went from there and I’ve progressed the sound over the years.

I wasn’t necessarily a die-hard fan as a kid, but things were different; when I was growing up, we were out playing on our bikes and running in fields. You had tapes or albums maybe, but you didn’t listen in the same way as kids do now to get into singing like their favourite stars now. Music wasn’t so available like it is now where you click a button and have an album on your phone. But then the older I got, the more I appreciated the music and her voice and character.

I’ve never done a typical tribute show; I didn’t go out there and speak with an American accent, I never performed ‘Whitney as Whitney’. I performed Whitney’s music as Elesha; it was always me singing how she sang. And Queen Of The Night is the same. I work really hard with her actions, how she holds the mic and bring in those elements of Whitney to the show.

Whitney: Queen Of The Night has been touring for a few years now. When did you join the show?

I’ve been touring with the show since the autumn, understudying Whitney and as a backing singer. Thanks to that opportunity, I can feel I’m growing, and my vocals are getting stronger and stronger. I love that feeling of being on a big stage.

You perform as both Whitney Houston and Tina Turner – they’re very different artists. What’s it like recreating these iconic female performers live on stage?

It’s funny really. They are such different sounding performers!

Tina’s not got a growl as such, it’s just something which is there in her tone. It’s really difficult. People think it’s shouting but it’s not, it’s a very particular tone that she has, and she’s so free with her performance.

Then when I’m on stage as Whitney it’s almost the opposite.

Do you prefer one or other of them to perform as?

That’s like asking me to choose my favourite child! I love them both in totally different ways. With both, I’m always learning, but especially with Whitney there are songs I have to always go back to and re-listen to how she sounds, I’m constantly learning how to improve with her voice. Then with Tina it’s all the fun of her performance.

From Whitney, Love Will Save The Day, I just love the music and singing that song.

What’s the secret to the lasting popularity of singers like Whitney?

I’d say Whitney audiences are 80 or 90per cent female – it’s people getting together for a real girls’ night out.

Her songs have never gone away. Even youngsters now, they know I Wanna Dance With Somebody or I Will Always Love You. You do those songs and they’re all over it, and it’s not fading away.

It’s such a shame that Whitney’s life ended too soon. I sometimes wonder what it’d be like if Whitney had come through her problems too, if she was still alive and I was able to go and see her perform.

You’ve been working in the music industry for a long time – you started writing with a record company aged just 17 and have been on TV reality talent shows. Can you tell us about the switch to the world of tributes?

I never used to do tributes, I was striving to do my own stuff and put out my own music. Things happened in my life, and I was in between things not really knowing what to do. I didn’t know how to get into the tribute business, but at the same time I felt that by doing that I would miss doing my own thing too.

But I’d done my album and did lots of trying to make it before doing the TV shows. I’d tried the traditional, old fashioned methods to get signed. It was just never meant to be. So, I decided it was time to take it away from being me and into being someone else.

How was your time on The X Factor and The Voice – and what did you learn from the experience?

When I did X Factor – in 2010 – it was nothing like the level it is now with all the media interest and social media. I was in the year of One Direction and Cher Lloyd, and Wagner – he was in Louis Walsh’s Overs category with me, but I went home after judges’ houses. It’s not a platform in the same way it is now for the early stages, and you’re left on your own to find a path and help yourself.

I was asked to audition for The Voice, and I first went when I was pregnant with my daughter Kookie, who’s now six – but I realised the live shows would be on when I was due with her so had to back out. But I auditioned again in 2013 as part of a duo [getting to the battle rounds in Team will.i.am], and again in 2014 [again, getting to the battle rounds with Team Tom].

Doing both of these did give me a boost at the time, even though I got so close but ultimately wasn’t successful. I don’t know what people think of me as an artist having done those shows, but I’m glad to be moving on into this new camp now.

Forget being mentored by Louis Walsh – tell us about working with Mathew Knowles, Beyoncé’s dad!

So, yes, I did a TV show a long time ago, where I was mentored by Mathew Knowles – Beyoncé’s dad – that was pretty mad. It was Chancers on Channel 4’s T4, and I won the chance from UK auditions to spend a month in Houston, America, where the group of us chosen had various challenges. Mine was to sing at the same studio where Whitney Houston had recorded, little did I know what was to come all these years on.

But, that experience gave me a really tough skin, to know that whatever you do don’t worry about what’s happened in the past; it’s all brought me to where I am now.

Tickets for Queen of the night here