The Gift That Keeps Giving: Episode One - Review

A new online sitcom with a West End Cast 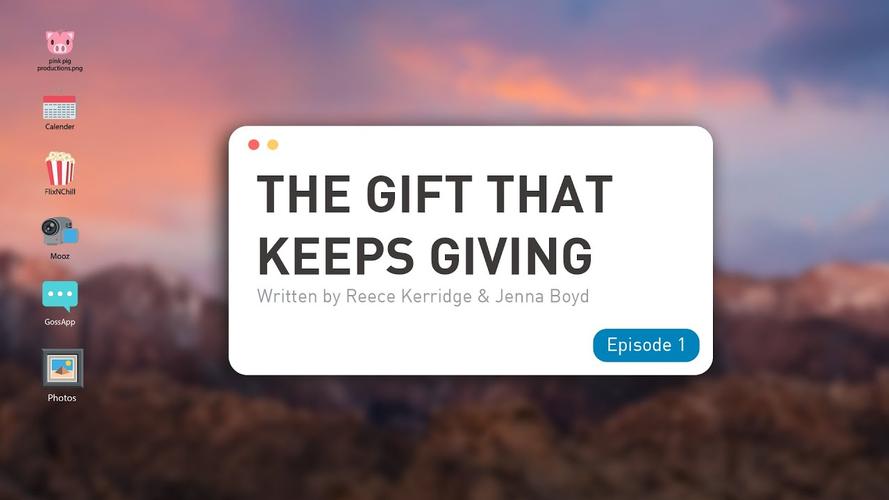 They say that all the world is a stage, and in a year that saw traditional ‘normal’ stages closed all over the world, the theatre industry was forced to see it that saying truly lived up to expectations by finding a new stage and adapting to a new ‘normal’. Creatives and those who work within the industry are a hardy bunch, and this year has proven that they can innovate and adapt, finding a new stage on the world wide web. Many new companies and new productions have come out of the darkness of the theatre shutdown, and one of those new companies is the brilliantly named ‘Pink Pig Productions’ set up by performer Reece Kerridge, which has just released the first episode of its new online sitcom ‘The Gift That Keeps Giving’.

Written and directed by Kerridge in partnership with Jenna Boyd, ‘The Gift That Keeps Giving’ stars Tori Hargreaves (Blood Brothers, Soho Cinders), Jen Caldwell (Six, Shrek), Molly McGuire (Fame, Starlight Express), Claire Learie (The Attic, Universal Studios), Chloe Gentles (Avenue Q, Beautiful), Jed Berry (The Book of Mormon, Kinky Boots) and Josh St Clair (Frozen, Kinky Boots), this new sitcom is based around a group of friends who all discover they have something in common when it comes to their dating lives.

When best friends Ellie (Hargreaves) and Karis (Cadwell) settle down for a virtual movie session using famous video chat app ‘Mooz’, their conversation turns to relationships and the new boys that they are seeing. As they become more excited and more of their friends join the call, things become a little complicated. Filmed entirely over Zoom, this little sitcom manages to fit a lot into its running time of just under 15 minutes. Hargreaves’ Ellie is to the point and desperate to get to the bottom of the drama whilst Cadwell’s relatable Karis is all of us at Christmas time, constantly looking around for what we can eat next as she brings her friends into the video call.

Chloe Gentles plays Lucy-Mae, the girl whose mother seems better at the dating game than her and is near constantly triggered by her friends cheeky comments whilst Molly MaGuire’s Becky finds herself brought into the drama with her storytelling of the guy she met at the bar. Claire Learie makes it look easy to deliver a long and complex she said, I said, she said back and forth style monologue and Jed Berry may only appear later in the episode but certainly makes an impact as Tom. We may not directly meet the character played by Josh St Clair in this first episode, but he certainly has a featured role and I look forward to meeting him in the future.

The story line is both relatable and funny, with many able to relate to the idea of meeting someone in a bar and hitting it off. The group of friends are all believable with their own stories to tell and I feel that we will hear more of these stories in the upcoming episodes. The writing is clever and true to life, I think we can all relate to video call catch ups now after this year and it’s easy to be drawn into the story. I look forward to the future episodes and seeing where this story goes, I have a feeling it’s going to get very interesting.