Can you outplay the criminal underworld? 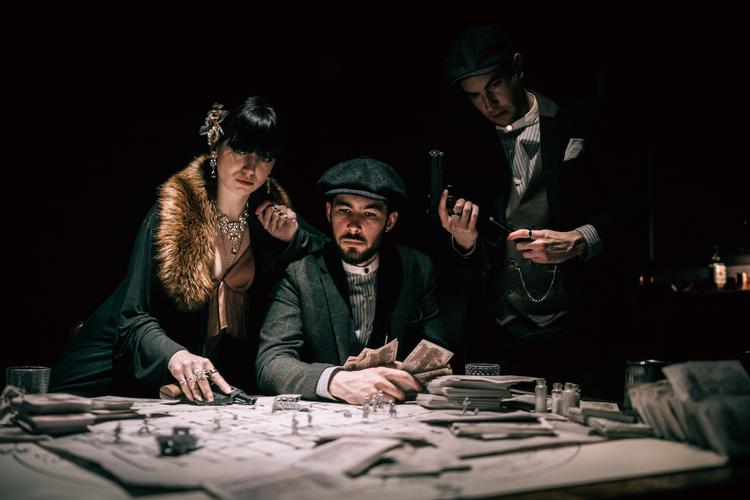 Always been on the straight and narrow? Fancy delving into the dark inner workings of gangsters? Well, now is your chance. Let this outstandingly brilliant immersive extravaganza take over.
Step into the criminal underworld in London’s Elephant and Castle, become cunning, learn to plot and rob, trade information and secrets and hunt for clues.

CROOKS 1926 is like Peaky Blinders, but forget watching from afar because this show is all about being hands-on. The cast cleverly weave in all the audience so everyone has a part to play and it all comes together brilliantly.

It’s best not to say too much about the plot, even in this review, so the beauty of what COLAB Theatre has created can unravel in front of you without ruining anything.
But essentially it’s the usual bitter conflict between rival families – but who will come up trumps and what lengths will you go to to help the McDonalds?

The cast, played by Simon Pothcary, Angus Woodward, Holli Dillion, Tom Black and Naail Ishaq, have absolutely nailed this show, adding to the drama, suspense, intrigue and entertainment.
Everything has been intricately put together and it shows in the end product.

It’s superbly entertaining, so much so that I didn’t want the two and half hour show to end.
It’s immersive theatre at its best. I’ve never felt so involved in a role before and I absolutely loved it, darting in between rooms, one minute looking for clues, the other blending in with the crowd to not draw attention to myself. Then there were the random deals I was making, the secret conversations I was having, so absorbed in my mission but loving every minute of being so devious.

And that’s what makes CROOKS 1926 so clever and unique. It pulls you in such a way that all you want to do is get involved and fulfil your role, no matter how out of character you are from your natural self.
And have no fear if you get stuck along the way – you can cheekily ask for help and the cast oblige but again so cleverly, because it’s done in a way like it’s all part of the plot.
There’s only one way to enjoy this superb show and that’s just to throw yourself into it and have a fabulous night – because you will.

It’s on until March 29. Put it on your to-do list now because this is one show you should not miss.