The relationship between two brothers explored physically and emotionally 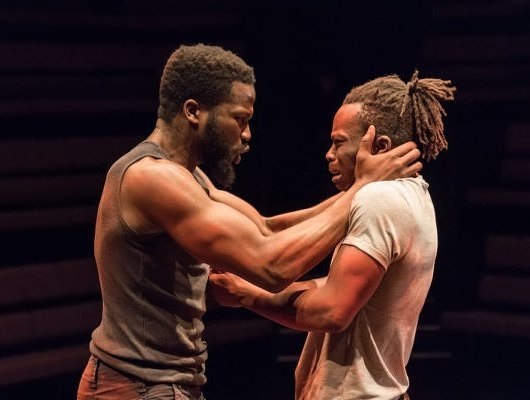 The Brothers Size is one of the earliest works of Tarell Alvin McCraney, well known nowadays for Moonlight, the Oscar winner movie. Did you like it? Some of my friends did not, but I did, so I was looking forward to this play.

Oshoosi Size and Ogun are brothers. One repairs car, the younger just got out of prison. While Ogun, the older, tries to help Oshoosi to start a new life, between them arrives Elegba.

I recently saw “The barber’s chronicles” at the National theatre and there are some resemblances with The brothers size, especially in relation to the exploration of virility and the dynamics between men. Obviously the trait d’union is the production of Bijan Sheinani (who produced both plays).

I could not take my eyes off the two wonderful actors, Sope Dirisu and Jonathan Ajayi. They were great expressing the intimacy amd tenderness of the relationship between brothers, but also the frustration and the angriness. It was amazing to see emotional and physical performances combined so well together. And the music gave a special touch to a night that I will remember.