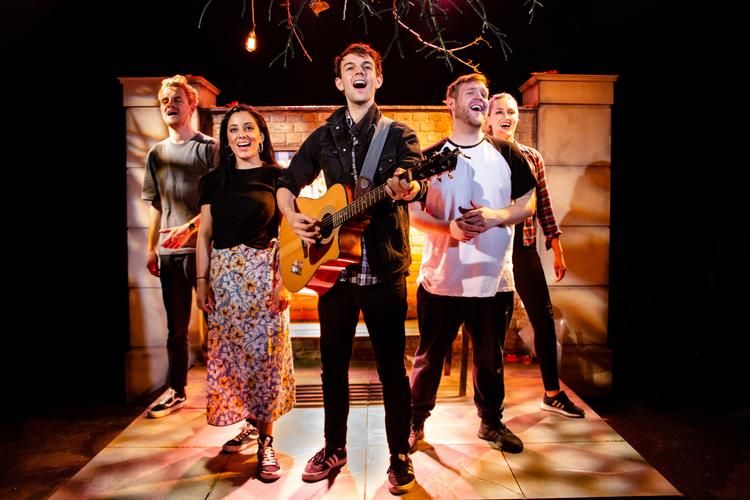 Fiver starts with a professional busker, played by Alex James Ellison, who also wrote the show with Tom Lees.  Alex is also the charming narrator of the story, that follows the life of a £5 note from one owner to the next one. The busker receives a £5 note from a member of the audience after a gig, and this is how everything begins.

In a cycle of vignettes, we touch the lives of different characters (the ever-changing owners of the note), all played by the cast of five (Luke Bayer, Dan Buckley, Aoife Clesham, Hiba Elchikhe and Alex James Ellison as the narrator). We see a homeless man, a woman who is not happy about her life and career, a teacher, a widowed father, and more. The situations are funny, sad or moving: all of them very cleverly written.

The idea of the musical (that follows the life of a £5 note passing through the hands of different people) is very original and interesting. Unfortunately, this rapid series of scenes makes it a bit disjointed and confusing, especially in the second act, when also some parts feel rushed and the story goes back in time.  Also, it is difficult to empathize with the characters and get to know them.

What is really special about Fiver, is the music. From catchy tunes (like the opening/closing number “Change is bringing me down”) to emotional ballads (like “For your light to shine”, “You’ll be a man, my son”and “Whisper to me”), from pop to rock, the score it is gorgeous and the cast sing beautifully. It is really a treat to hear Daniel, Luke, Aoife and Hiba singing these songs.

The small set of the (very hot in summertime) Southwark Playhouse Studio and the simple set by Justin Williams offer an intimacy that would probably be lost on a bigger stage. Also, being the cast of only five, it never feels crowded.

Fiver is a new British musical with a unique concept and a big potential. The fantastic cast and the wonderful music make Fiver an engaging and entertaining show, that it's worth a trip to Southwark Playhouse.

It runs until 20 July

Photo: Danny With A Camera