An exploration of identity, gender and meaning 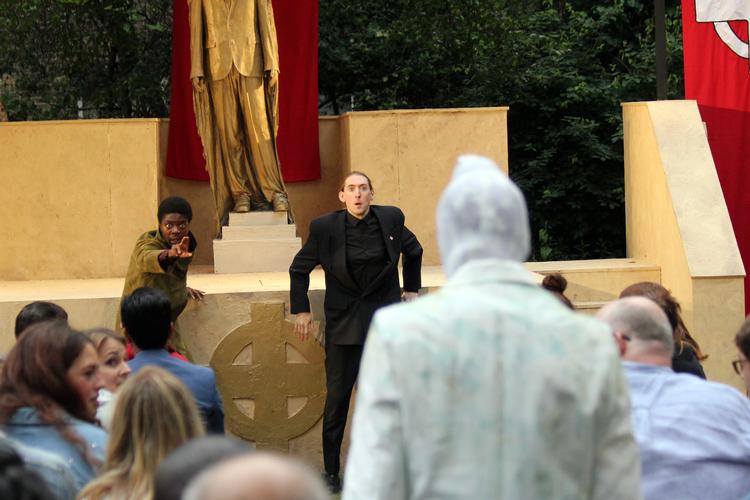 Hamlet is a celebration of one of Shakespeare's finest pieces of work.

The title role of Hamlet is played by Jenet Le Lacheur, a non-binary transgender actor and interestingly his character throws up identity issues – a man to most people, but ‘my lady’ to Horatio (Harold Addo).

It’s held at St Paul’s Church in Covent Garden – but it’s outdoors, and not just that, you move around as you’re taken to different parts of the beautiful grounds for different scenes.

As the story unfolds we learn that Hamlet’s father was a populist King who rose to power promising a return to England’s golden age. But then he’s murdered and within a month Hamlet’s uncle seizes the throne and marries his mother. Hamlet seeks to find out exactly how his father died.

The acting by all was superb – the line-up included Clare Bloomer, Jenny Horsthuis, Paula James, Vinta Morgan and Joe Parker. They were fresh, this version was modern without ramming modern down your throat, and you could really feel the emotion and vulnerability during some of the scenes.

But sometimes feeling what you are supposed to feel as a viewer became difficult because you’d suddenly be distracted by the DJ from what sounded like a pub night just down the road. But when you concentrate, the music and the cheers from those revellers can easily be drowned out.

As the saying goes ‘if you can’t beat them, join them’ and that’s exactly what the cast did with some unexpected touches to make this performance so refreshing. At one point from nowhere music is blared out sending the characters on stage into full dance mode with Hamlet donning stilettos for the occasion.

In another scene the audience is ushered into the church itself and it felt like we were all going to start dancing in a rave and be part of the show, I was ready for it, but alas we did not.

But moving around came in quite handy in the end – the show was a whopping three hours – and while it was a great tribute to Shakespeare – it was a long evening for a week night.

The performance was edgy and I was really looking forward to the famous  “To be, or not to be, that is the question” line and when it came it felt like a bit of a let-down because there was no drama in it - but the rest of the show made up for it.

Watching Hamlet in the great outdoors was a fantastic way of spending a lovely warm evening.

These modern versions can be so hit and miss but this was certainly a hit and ticked all the right boxes.