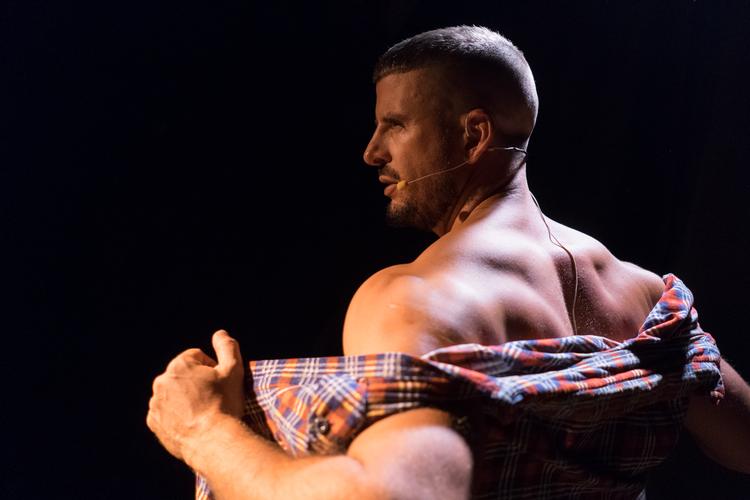 Verbatim is a tricky beast to tame. In this one-man expedition, creator and performer Alexis Gregory gives this dramatic device a tickle behind the ear and a shiny new collar as he demonstrates a carefully considered and beautifully composed telling of three testimonies from the last six decades of the LGBTQ+ community.

With no offstage time and no discernible set, we jump onboard to listen to three interviews performed in character in their original words. The subjects questioned are Michael-Anthony Nozzi, one of the last Stonewall survivors; Lavinia Co-op a drag artist from the 1970s and Paul Burston, recognisable as a leading ACT-UP activist from the 1990s. The interviews welcome the audience to experience their journeys arcing from the Stonewall riots of 1969. They comment on the moments that were significant in their own timeline, but also pivotal junctures that, as a society, we may not have realised would have as much intrinsic effect on our time as they have.

Director Rikki Beadle-Blair has encouraged a simple staging, which only enhances the sentimental vocal detail and rhythm captured from Gregory's subjects, keeping you glued to his movements and on the edge of your seat. Only a great storyteller can take you to places you have never experienced and open your eyes and your heart to the rawness of those occurrences; from the gore and brutality of the Stonewall riots to bohemian New York and finally to the fiery punk East-End. It is of course credit to the real people interviewed that the accounts are so frank and human but also, to edit and shape something so delicate and veritable, Gregory had a nigh impossible task on his hands. The extraction of such uninhibited information and the precision of forming the play as it is performed today are truly impressive skills that feel absolutely necessary to create relevant theatre like this.

The transformation between characters is touching, with only a change of top and some stonking stilettos as a nod to each personality.  The tone was set to feel like it could be anywhere, echoing that these histories are and must be universally acknowledged. The warm lighting wash kept us at home but was unbiased enough to let us travel anywhere these voices would take us.

RIOT ACT refreshes its audiences with the fact that recent history is often the most distant. New generations do not know how, or whether they should speak to their elders about these events. Throwing real voices on to the stage with all of their passion, understanding, and respect for what came before encourages those three things from its audiences.

Pieces that are created with this much of a rooted grip on the history form the very essence of what theatre is becoming today; a platform to talk about the issues that we feel we can not talk about with our closest confidants. Keep it loud, keep it present and keep it coming!